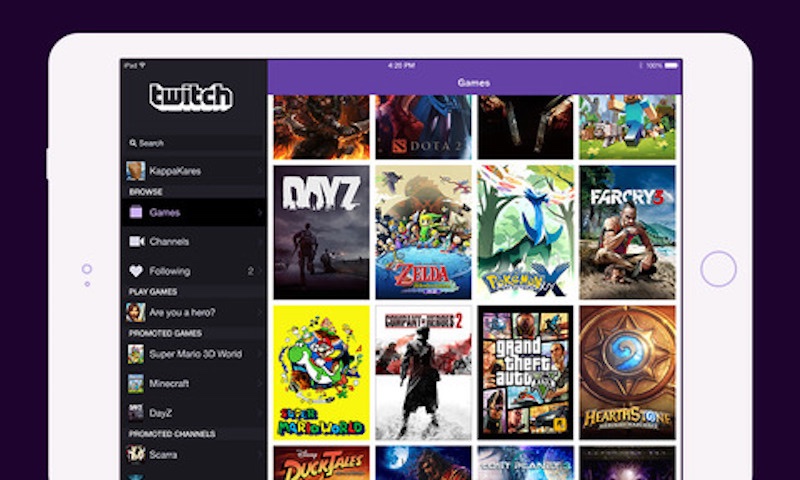 With iOS 9 releasing for iPhone and iPad, you'd have noticed that your favourite apps have been receiving updates for maximum compatibility with Apple's latest iteration of its mobile OS. These changes are most notable for the iPad, considering that the large screen size allows for multitasking and split-screen support which Apple has enabled for the iPad Air 2 with iOS 9.

No surprise then that streaming service Twitch has updated its iOS app for multitasking support.

"What would make any iPad app more interesting? If you answered 'having Twitch open at the same time', you would be correct. And now, our app has iOS 9 multitasking support baked in so you can do more of everything, all while watching Twitch," the company's blog reads.

The app now supports the Slide Over feature, which lets you move swiftly between apps. Useful if you're tweeting while watching live-streams. This feature is supported by the iPad Air, iPad Air 2, iPad mini 2, iPad mini 3, and iPad mini 4.

Another feature enabled in the new Twitch thanks to iOS 9 is Split View. You can divide your screen between two apps and use both. This is supported by the iPad Air 2 and iPad mini 4.

Furthermore, you can pop out the video player and watch a stream when you're not in the app. What this means is you can play a game like FIFA while watching videos about it. This Picture in Picture feature works on the iPad Air, iPad Air 2, iPad mini 2, iPad mini 3, and iPad mini 4.

In addition to these, you can now be redirected to the Twitch app when you click a link for the Twitch website on iOS 9 and use AirPlay mode via your iPhone or iPad's control centre.

Not to be left out, the Xbox One app for Twitch received an update as well to include features that were exclusive to Web and mobile. These include Whisper Support which allows seamless retrieval of messages across devices, now including Xbox One, viewing Twitch chat in Snap mode and being able to chat with broadcasters in their preferred language.