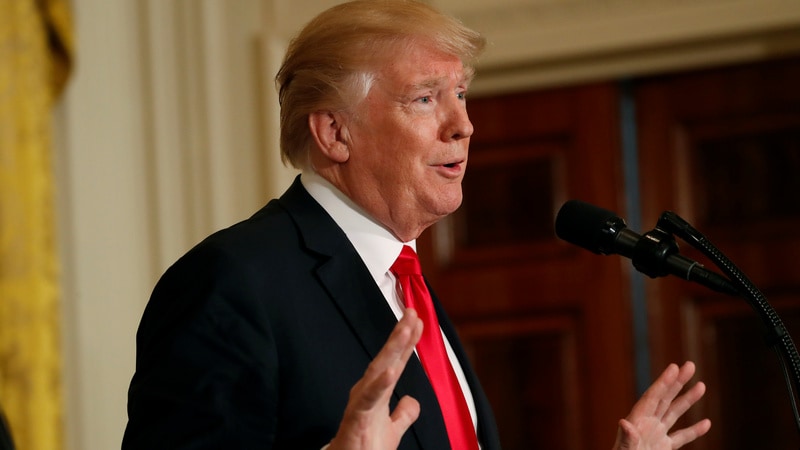 President Donald Trump is set to pit the video game industry against some of its harshest critics at a White House meeting on Thursday that's designed to explore the link between violent games, guns and tragedies like last month's shooting in Parkland, Florida.

Following the attack at Marjory Stoneman High School, which killed 17 students, Trump has said that violent games are "shaping young people's thoughts." And the president has proposed that "we have to do something about maybe what they're seeing and how they're seeing it."

Trump has invited video game executives like Robert Altman, the CEO of ZeniMax, the parent company for games like Fallout; Strauss Zelnick, the chief executive of Take Two Interactive, which is known for Grand Theft Auto; and Michael Gallagher, the leader of the Entertainment Software Association, a Washington DC-focused lobbying organization for the industry.

Three people familiar with the White House's planning, but not authorised to speak on the record, confirmed those invitees. A spokeswoman for the White House declined to comment on Wednesday. ESA confirmed its attendance this week, but the others did not respond to questions.

Opposite of them are expected to be some of the video-game industry's toughest critics, including Brent Bozell, the founder of the Parents Television Council, and Rep. Vicky Hartzler, a Republican from Missouri, the three people said. After another shooting - the 2012 massacre at Sandy Hook Elementary School in Newtown, Connecticut - they each called on government to focus its attention on violent media rather than just pursuing new gun restrictions.

Bozell, for example, argued then that video games depicting graphic, gruesome incidents deserve as much attention and scrutiny as organizations like the National Rifle Association. "Somehow, Democrats isolate the inherent evil of a gun almost as if it's self-shooting, while denying our violent media has any influence on these under-21 shooters," he wrote at the time.

Spokespeople for Bozell and Hartlzer each did not respond to emails seeking comment.

Ultimately, the upcoming meeting could spell the beginning of a new conservative crusade to regulate whether and how video games depicting graphic acts are sold, and to whom, at a time when the US government is grappling to find a solution to an uptick in gun deaths around the country. To that end, Trump also has invited Republican Sen. Marco Rubio as well GOP Rep. Martha Roby to his Thursday meeting. Their offices did not respond to emails seeking comment.

"The president wants to continue the conversation on every different area that we can to help promote school safety," said White House press secretary Sarah Huckabee Sanders during her press conference Wednesday. "We think it's an important discussion to have and one the president looks forward to."

Trump's face-to-face meeting with the video-game industry - and its chief critics - is the White House's latest roundtable on gun violence. In response to the Parkland attack, the president has used these sessions to pitch a few ideas for reforms, including a controversial proposal to arm teachers with guns.

Yet Trump is not alone in questioning the link between violent video games and mass shootings. Even his predecessor, former president Barack Obama, posed the same questions after the attack in Sandy Hook. "Congress should fund research into the effects that violent video games have on young minds," he said at the time.

But Democrats and Republicans split sharply over how to tackle the problem. In the past, Obama and his allies sought major new restrictions on sales of assault rifles, for example, while seeking to empower the Centers for Disease Control and Prevention to study the effects of violent video games. Republicans historically have not pursued strong gun control measures, and they have left in place a law that bans the CDC from probing gun violence.

For now, existing research tells a complicated story about violent video games. Exploring the issue in 2015, a task force commissioned by the American Psychological Association linked them to "increased aggression in players." But its report also acknowledged it lacked the evidence to tie such graphic content to criminal violence. The video-game industry itself, meanwhile, has trumpeted academic research that shows no link between the two.

"Blaming video games for violence in the real world is no more productive than blaming the news media for bringing violent crime into our homes night after night," argues the ESA, the industry's trade group, in materials it provides online.

Conservatives - some of whom are sceptical of new restrictions on gun ownership - see it differently.

"We must have a meaningful conversation about mental health issues and other possible cultural and societal contributors to violent behaviour, such as violence in video games," she added.

And last year, after a gunman killed 59 people outside of Las Vegas hotel, Bozell turned his attention to Hollywood. He argued that some of the most popular movies at the box office included scores of scenes involving guns - even as prominent actors and directors seek greater restrictions on U.S. gun sales.

A fear of regulation previously has prompted video game makers to change their practices. In 1994, they banded together to institute their own system, the Entertainment Software Ratings Board, or ESRB, which assigns video games a rating based in part on whether they include sexual or violent content. The leader of the ESRB, Patricia Vance, also has been invited to the White House on Thursday, three people familiar with the administration's plans said.

Even then, though, the promise of greater transparency and oversight didn't satisfy all policymakers. In California, the state legislature in 2005 adopted a law that banned the sale of violent video games to anyone under age 18. Apoplectic at the prohibition, the video game industry sued the state in response, and in 2011, they emerged victorious after the Supreme Court invalidated the restriction.

Now, in the aftermath of Parkland, conservatives are renewing their calls for stronger regulation - rules that span more than just video games.

"As the White House and other leaders work to confront societal gun violence, we hope that they will demand meaningful change from the entertainment industry, which presents dress rehearsals for gun violence on TV, in the movies, and in violent video games," said Tim Winter, the president of the Parents Television Council, in a statement Wednesday.