Apple rejected the app over a year ago citing "business conflicts" but it is now finally available for users to try out. 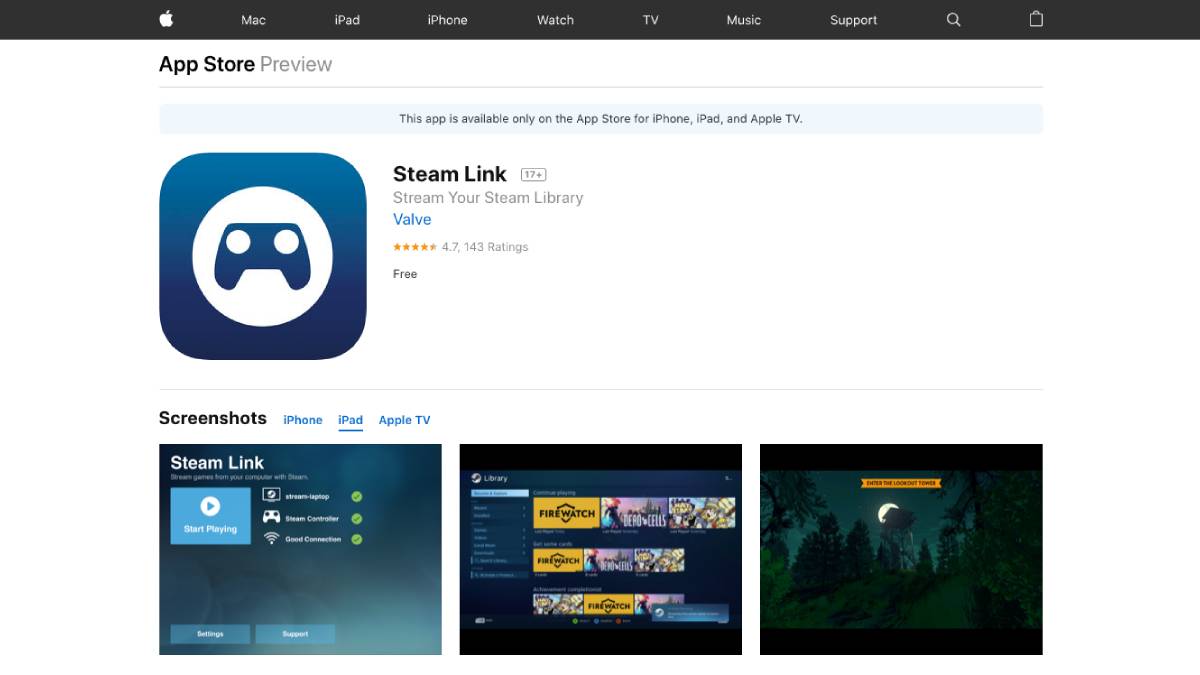 Valve's Steam Link app, which allows PC users to stream their Steam games from a PC to an Apple TV, iPhone, or iPad, is finally available to users after having been rejected from the iOS App Store by Apple over a year ago. The app allows users to play their Steam games on Apple's devices although they are actually running and being rendered on a powerful enough PC, as long as they have a high-speed local Wi-Fi network.

Although Valve announced the app for Android and iOS on May 9 last year after having made it through Apple's App Store approval process, the iOS app was withdrawn the next day. A statement released by Valve attributed this to "business conflicts" that Apple said its original review team had missed. The conflicts in question arose from the fact that users could purchase games through Steam using the app.

Apple has on many occasions denied approval for apps that allow users to make purchases without going through the App Store, which gives Apple a percentage of the transaction. Valve said that it had pointed out to Apple that the Steam Link app works like a remote desktop tool, of which there are many in the App Store, and as such users are actually making purchases through the desktop Steam client. However, Apple rejected that argument. The company later said it was working with Valve to clear the app.

Now, the Steam Link app is finally available for iPhones, iPads, the iPod touch, and the Apple TV, but the approved version does not let users purchase Steam games. It is unclear why the approval process has taken a full year. The app has been available for Android for some time already. Steam users will need a 5GHz Wi-Fi network and Valve recommends that the PC running Steam should be connected to the Wi-Fi router with an Ethernet cable. The app will work over a local network within a user's home or office.

Steam Link requires an iPhone or iPad running iOS 11 or later, and a PC (Windows or Linux) or Mac running Steam. Users can use the Steam Controller to play games, or use Bluetooth keyboards and mice. Many Made For iPhone/iPad certified accessories including game controllers are supported as well. Valve says that the target quality for streaming is 1080p at 60fps, but with a powerful enough PC and strong network connectivity, 4K 60fps streaming is possible. The company has developed a custom low-latency network protocol and uses H.264 video compression to send game visuals over the network.

The Steam Link app is available for free. Valve used to sell a small set-top box called Steam Link which allowed exactly the same kind of game streaming to a TV, but the product has since been withdrawn. Users can also download Steam Link software to run on a Raspberry Pi. Valve also recently announced Steam Link Anywhere, which would let users stream games over the Internet from wherever they are.