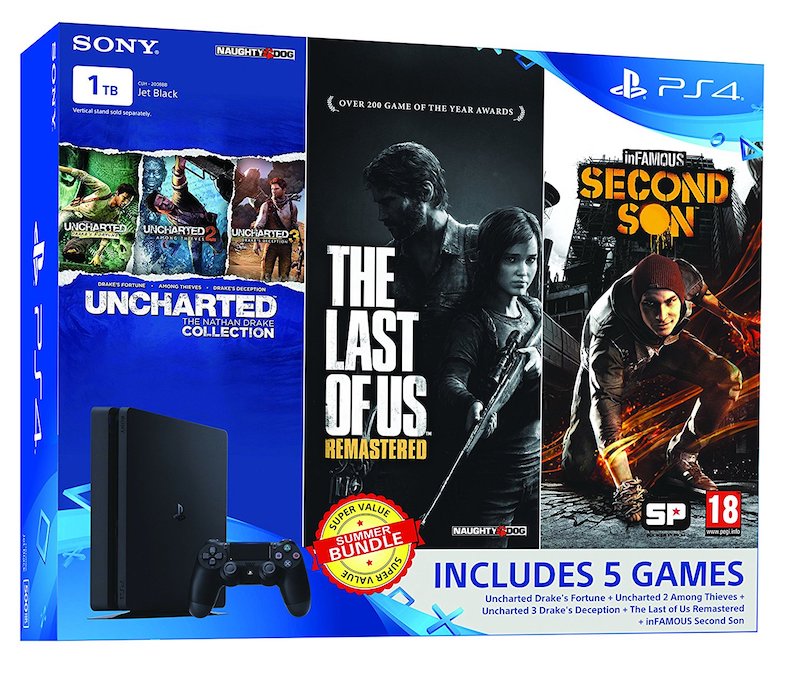 Sony India has a new PS4 Slim bundle on the way. This time around, according to a listing on Amazon India, you’ll be getting a PS4 1TB console, Uncharted: The Nathan Drake Collection (which consists of the first three Uncharted games), The Last of Us Remastered, and Infamous Second Son.

While pricing or release date isn’t up on sites like Amazon just yet, several retailers have confirmed with Gadgets 360 that it would cost Rs. 32,990 and be available from next week at the latest. Not too shabby considering that these are some of the better games on the console.

However, we can’t help but feel that due to the age of the included games— The Last of Us Remastered and Infamous released in 2014. Sony should be having bundles with more recent titles, similar to what they did with Horizon Zero Dawn, Watch Dogs 2, and Call of Duty: Infinite Warfare.

And this isn’t all. Sony appears to have launched another PS4 Slim bundle as well. Rs. 29,990 gets you a PS4 Slim 500GB console and two DualShock 4 controllers. Considering PS4 controllers retail for close to Rs. 5,000, it’s decent value if you play local multiplayer games like FIFA 17, but if you prefer gaming on your own, the Horizon Zero Dawn bundle provides greater value if you can find it. We've reached out to Sony India for comment and will update this story once we hear from the company.

Before you ask, no, there are no bundles for the PS4 Pro just yet. Though there are rumours that the recently announced Star Wars: Battlefront 2 will be available with the PS4 Pro when the game hits on November 17. Right now there’s only the PS4 Pro 1TB console available for Rs. 38,990 with no games.

Confused as to which PS4 to buy? We have you covered with our comprehensive guide.

Airtel 4G Is Fastest in India, Jio Most Widespread, Says OpenSignal
How to Use Google Authenticator App to Secure Your Gmail Account