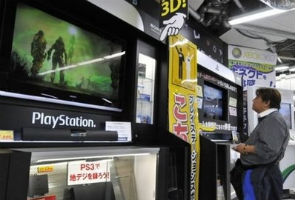 Highlights
Sony began restoring its PlayStation Network service in the United States and Europe on Sunday after shutting down the service almost a month ago due to a massive security breach affecting over 100 million online accounts.

Restored operations are mainly limited to online gaming, chat and music streaming services. Sony said it aimed to fully restore the PlayStation Network by the end of May.

Limited services will also resume in Australia, Canada, New Zealand and the Middle East, and Sony said it will start restoring the service for users in Asia soon.

Sony's PlayStation network is a system that links gamers worldwide in live play. Sony shut it down on April 20 after discovering a hacker attack and said personal data, including credit card numbers, may have been stolen. But the company said Sunday it had not received any reports of the stolen information being used illegally.

Kazuo Hirai, chief of Sony Corp.'s PlayStation video game unit, said in a statement that the company has beefed up security measures to protect customers' personal data. He offered "sincere regret" for any inconvenience caused by the network intrusion.

"While we understand the importance of getting our services back online, we did not rush to do so at the expense of extensively and aggressively testing our enhanced security measures," Hirai said.

Among the 100 million user accounts, Sony said about 92 million can access the limited PlayStation network service.

The network serves both the PlayStation video game machines and Sony's Qriocity movie and music services. It is a system that also allows users to upgrade and download games and other content.

Sony spokesman Sosuke Kamei said the company's probe into the hacker attack was ongoing. He declined to give details on the investigation.

Sony came under heavy criticism over its handling of the network intrusion. The company did not notify consumers of the breach until April 26 even though it began investigating unusual activity on the network from April 19.

Last month, U.S. lawyers filed a lawsuit against Sony on behalf of lead plaintiff Kristopher Johns for negligent protection of personal data and failure to inform players in a timely fashion that their credit card information may have been stolen. The lawsuit seeks class-action status.

Since the shutdown of the PlayStation Network on April 20, Sony's share price has dropped nearly nine percent to close at 2,241 yen ($28) on Friday.
Comments