PUBG Mobile Getting New Livik Map Today With 0.19.0 Update: All You Need to Know

PUBG Mobile’s new Livik map is exclusive to the mobile version of the game, unlike the previous four maps that came to PC and consoles first. 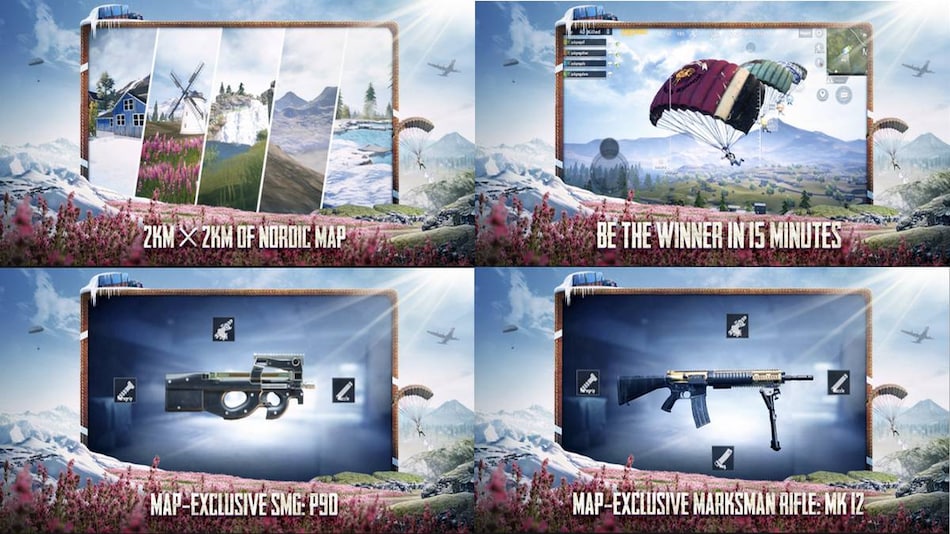 PUBG Mobile will get 0.19.0 update today, and the new update will bring the exclusive new map called Livik. The developers have shared patch notes for the new update with all the changes and improvements that we can expect to see in one of the most popular battle royale games on mobile. Livik has been described as a Nordic-style map that will have 15-minute matches in a small 2x2 area. Further, it has also been revealed that Royale Pass Season 14: Spark the Flame will start from July 14. The patch notes state that this update requires around 1.84GB on Android devices and 2.13GB on iOS devices.

The update will be pushed out to all PUBG Mobile players starting today, July 7, and as per the patch notes shared by the company on Reddit, those who download the update between July 7 and July 13 will get 2,888 BP, 100 AG, and a Nightmare Helmet. The patch notes describe everything that will be part of the 0.19.0 update and some features that are coming soon. As usual, players on different version of the game will not be able to play together.

The Nordic-style map is 2km x 2km in size. It will have approximately 15-minute matches with two exclusive weapons namely, the P90 SMG and the Mk 12 marksman rifle. There is also a new vehicle - Monster Truck exclusive to Livik. It is part of the Classic maps like Erangel and Miramar. The developers have stated that this new map is still in beta and will be adjusted and improved over time.

There will be some Season 14 themed elements introduced in the Erangel and Miramar maps in Classic Mode. A ‘Small Statue' will be present in the map that will burn after players interact with it, dropping supplies and event items. A ‘Giant Statue' has “multiple construction stages that change as the themed event progresses” and burns up in the final stage. ‘Statue Camps' are tents located around the statue that have supplies in them.

The 0.19.0 update will also bring some adjustments in the Payload, RageGear, and Bluehole modes. Payload and RageGear modes will become weekend only modes while Bluehole mode will be removed entirely.

Other changes and improvements in 0.19.0 update

The PUBG Mobile 0.19.0 update brings several other improvements and changes to the game ranging from basic combat to settings to system features and more. Improvements have been made to the Pick-Up tab, improved rendering smoothness on low and mid-tier devices, addition of jump following, Team-up Lobby features to help players find suitable teammates quickly, and more.

Improvements to the Brothers in Arms system have been added, clans will be better classified with update 0.19.0. There are new achievements, download, Guncraft, voucher, and radio improvements as well.

Spark the Flame will bring back Roaring Dragon and Dragon Hunter-themed rewards from Season 5. There will be a new consolidated page for RP perks, an RP crate luck event, and a new RP Prime subscription collaboration with Google. There will be Prime and Prime Plus subscriptions which will give players 300 or 900 RP Vouchers every month, redemption discounts, and Airplane Ranking display perks.

Starting July 31, Team Gun Game in Arena mode will be available in PUBG Mobile on Friday, Saturday, and Sunday. It will be a 4v4 match and the two teams will go through multiple rounds and the one who wins with the final weapon, the pan, will win the game. It match can also be one by scoring the highest points when the time runs out. There is also a new map called Library which is an indoor map with three assault routes.

The Ancient Secret mode, a video of which leaked earlier, will be coming to PUBG Mobile's Erangel and Miramar maps and can be activated from the settings on the mode selection screen. It will bring an Ancient Temple that will start to float after a fixed period of time. There will be a slate puzzle that will lead players into a sealed room. Here, players will have to defeat the boss for “great rewards”. There will also be small randomly appearing ruins with crates and puzzles.

Additionally, the developers have stated at the end of Season 13, which is on July 12, a warm-up event will be available for a limited time where players can complete missions to earn a small amount of Season 14 ranking points that will convert into Season 14 season rating points.

At the time of publishing, the update was not out for Android or iOS devices.