PUBG Mobile 1-UC Bounty Raid features draws for each individual item listed and one lucky player will be get to win that item. 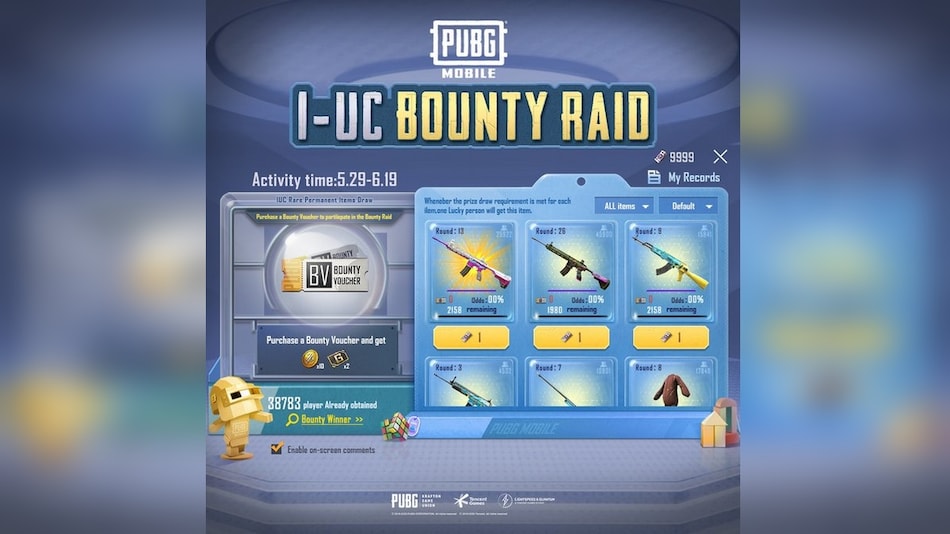 PUBG Mobile 1-UC Bounty Raid is live and with it, the game's players get a chance to win some attractive skins for as low as 1 UC that is one of the in game currencies. The announcement was made by the PUBG Mobile India Twitter account that also stated that the event started on May 29 and the end date is June 19. However, it is not as simple as buying the skin that you want with 1 UC. There is a draw for each item which the players will have to enter and hope they win that item.

PUBG Mobile 1-UC Bounty Raid – How does it work?

To participate in the 1-UC Bounty Raid event in PUBG Mobile, players will have to select an item they desire and purchase a Bounty Voucher for 1 UC. Once successfully purchased, the player is considered to be in the draw for that particular item. Each item has a certain participation requirement and when that requirement is met, the prize will be drawn and a random player will be selected as the winner of that item.

Additionally, the players who purchase the Bounty Vouchers will get 10 BP or 2 AG for each voucher. And of course, the more vouchers you purchase, the higher the chance of winning. The winner will be announced in the Bounty Winner section after which a new round will start.

The players who win an item can go to the Events section. If there are any uncollected prizes, player will be notified via mail once the event ends on June 19. Whatever prize the players win from the raid are permanent and there will be a short delay in receiving the reward.

The items in the 1-UC Bounty Raid include skins for weapons, vehicles, items, and characters. Players can see the odds of winning a particular item on the event screen as well as the number of participants remaining for the draw to commence. Notable, if the required number of participants is not met, the system will make up for the missing participants and draw the prize.