PUBG will be free for all Stadia users for two months and non-Pro users might lose access after this period. 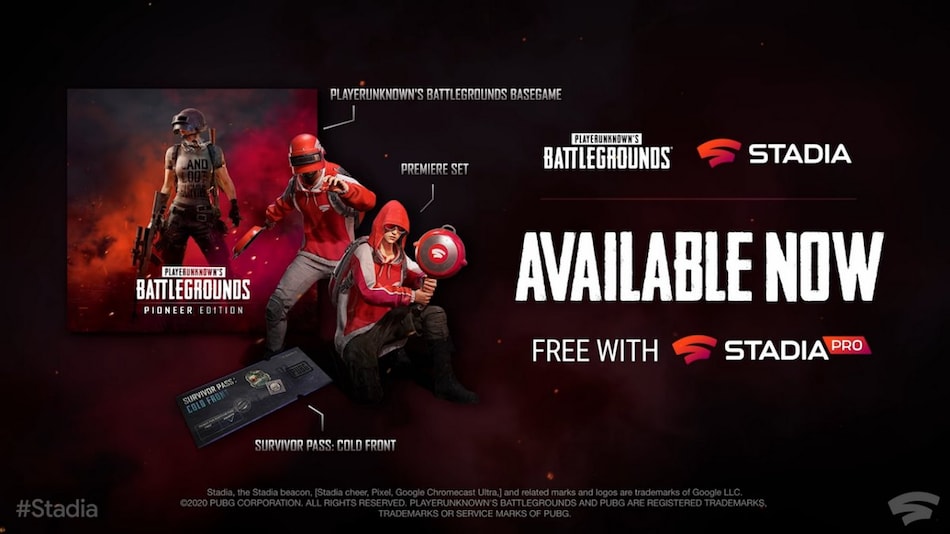 PUBG has been available on PC for three years now

PUBG has become a very recognisable brand of sorts with a huge userbase, both on mobile and PC. Now, it has been announced that PUBG PC version will be available for free on Google Stadia. The game streaming service by Google has been adding new games to its library and PUBG is one of the new additions. The announcement was made during Google's Stadia Connect from Tuesday, April 28. With people having to stay home due to the coronavirus pandemic, multiplayer gaming has become quite popular and this development comes as great news for a lot of people.

During Stadia Connect for April 2020 hosted on the Stadia YouTube channel, it was announced that PUBG has been added to Stadia and is available for free with Stadia Pro. This technically makes the game free for all Stadia users even if they do not have the Pro subscription as Google announced earlier this month that it will give two months of free access to Stadia Pro. But, after the two months of free access ends, users will presumably lose access to PUBG unless they but the Pro subscription. Typically, Stadia Pro costs $9.99 (roughly Rs. 750) per month and gives free games, along with the ability to stream at up to 4K resolution with surround sound.

The YouTube announcement also stated that since PUBG on Stadia is cross-platform, Stadia players can play with people on consoles as well. Further, there were some other games announced as well during Stadia Connect including five games by Electronic Arts. These include Star Wars Jedi: Fallen Order coming this fall, followed by Madden NFL, and FIFA. There were a few other games that are available along with PUBG, including Get Packed and Octopath Traveller.

Notably, Stadia is not available in India as of now. It currently only works in Canada, Belgium, Germany, Finland, United Kingdom, United States, and some other countries. You can find the complete list of countries where the service is available on Google's support website.

Google has been making continued efforts to make gaming more accessible to larger number of people as well as promote staying indoors amid the coronavirus pandemic. The search giant has been publishing Google Doodles with interactive games as well to keep people entertained.

Xiaomi May Soon Launch a 65-Inch OLED TV With Dolby Vision HDR
Animal Crossing: New Horizons Is Now the Setting for a Talk Show From Rogue One Writer Gary Whitta