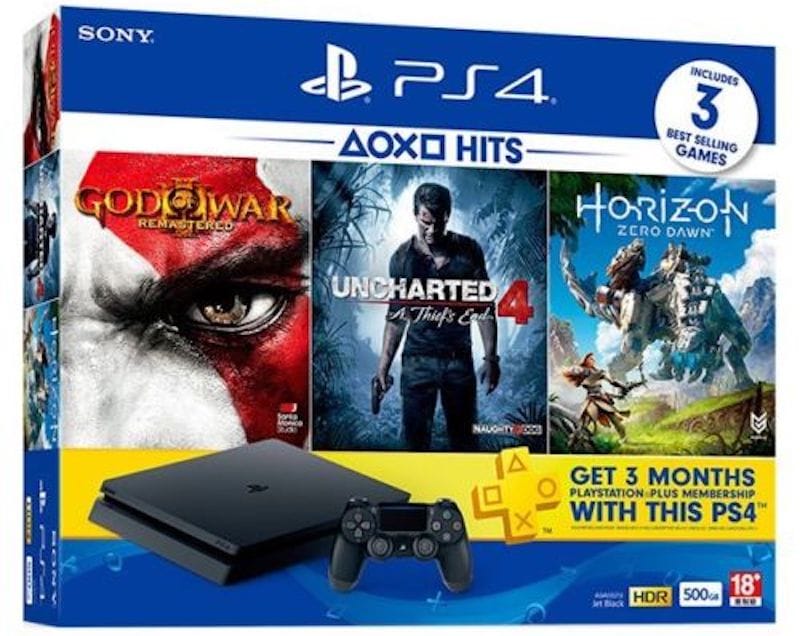 Another month, another PS4 Slim bundle. This time, Sony India has launched the PS4 Slim Hits bundle. It comes with God of War 3 Remastered, Horizon Zero Dawn, Uncharted 4, three months of PlayStation Plus, and of course a 500GB PS4 Slim. It’s available right now for Rs. 28,990 at select retailers both online and offline.

With Horizon Zero Dawn having an MRP (maximum retail price) of Rs. 2,499, God of War 3 Remastered sporting a Rs. 2,750 MRP, and Uncharted 4’s MRP being Rs. 3,999, they’re all available for much less. Often sporting an actual selling price of around Rs. 1,500 online. While this tends to diminish the savings with this bundle a bit, it’s still a decent option for someone looking to make the jump from a PS3 simply because it has three games you’d want to experience on Sony’s (relatively) new console.

Considering there’s a new God of War PS4 game this year as well as Spider-Man and Detroit Become Human to name a few, we won’t be surprised to see this being the first of many PS4 bundles this year as Sony looks to capitalise on its market leader position in India.

TAG: Episode 02 | How to Get a Game Development Job in India
Far Cry 5 Gameplay, PC Specifications, DRM, and More