Elder Scrolls Online Preview at E3 2012 : Does it hit the spot or disappoint? 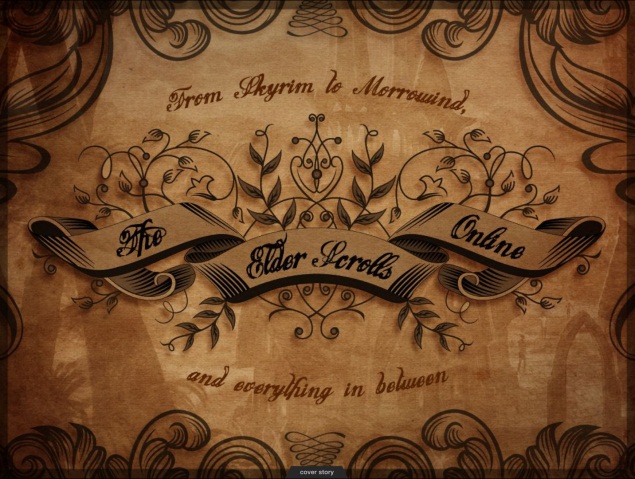 Set in a Tolkienesque world a thousand years before the storyline of Elder Scrolls V Skyrim, the player can choose to belong to one of three starting races. Further details of the choices weren't revealed. Creative Director, Paul Sage, however, did reveal that players could be who they wanted because of the minor choices they have after choosing the race so that no two players have to necessarily be the same even if they are from the same faction.

The game will feature locations from the entire continent of Tamriel such as Skyrim, Daggerfal, Hammerfell and Morrowind etc. Zenimax is banking upon the new feature of active and reactive combat as an audience grabber. Elder Scrolls Online boasts of real-time blocking and less interface elements on screen so that players can enjoy the scope of the world without too many sidebars eating up the frame. Disappearing UI menus are neatly arranged at the bottom of the screen and only appear when you mouse-over them. The game also has customized fighting abilities in shortcut bar which you can access on the home screen itself and the outcome of an immediate fight depends on which ones you select.

The new engine is specifically designed so that 200 people can be on the present on the screen at the same time. Elder Scrolls Online will also feature 25 person PVP dungeons which are a method of social interaction. There are solo questing opportunities as well, including exploration features that encourage you to wander. Points of interest will pop up on your map as you roam environments, and can sometimes lead to new quests that tie into your main tasks.

A visible disappointment, even at this early stage, is the presence of only third-person elements. Paul Sage defended this by saying anything else would've been too much for users to handle. Another cause of dissatisfaction is that the graphics appear very similar to World of Warcraft, and users are bound to ask why they should buy yet another game which looks similar.

That being said, Elder Scrolls Online is still an attractive package overall, that should appeal to new players and hardcore fans alike. The richly layered Elder Scrolls universe is bound to provide loads of challenges and fun filled hours of entertainment. Though not subject to any big risks, Elder Scrolls Online looks promising and one will hope to learn more about the features as the game nears its launch date in 2013. It has been revealed that the beta will be released prior to this, early next year, and the game itself will only be available for Mac and PC.