Alongside a GTA 5 delay, an Uncharted 4 remaster, and God of War Ragnarök trailer. 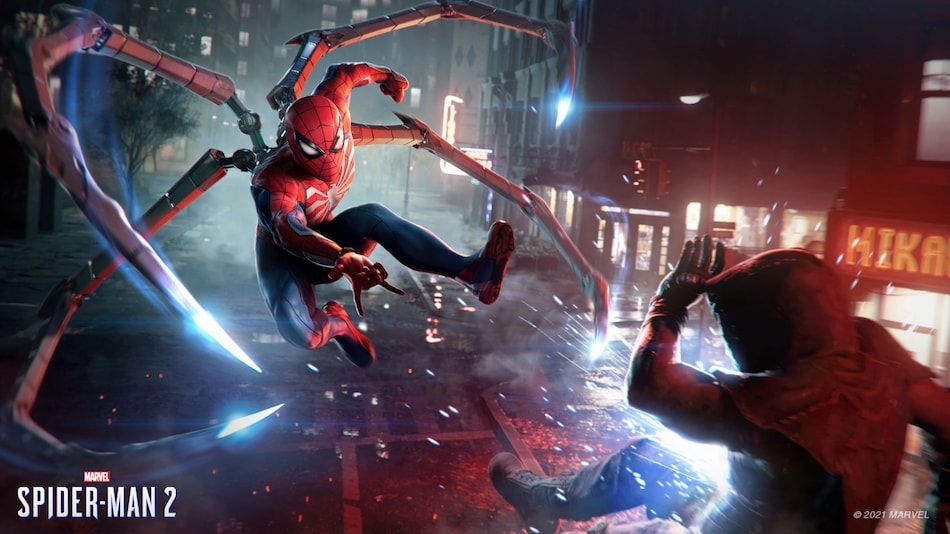 Spider-Man 2 with both Peter Parker and Miles Morales, joined by a new villain, in 2023 on PS5. A Wolverine PS5 game from the Spider-Man studio. A remake of the legendary Star Wars: Knights of the Old Republic, a timed exclusive to PS5. Remastered versions of Alan Wake and the last two Uncharted games. New trailers for GTA 5 (delayed to 2022) and God of War Ragnarök (also 2022). A proper look at Square Enix's Forspoken (coming Spring 2022) and Shift Up's first title Project Eve (undecided). And an in-depth look at the next Gran Turismo 7, coming March 2022. PlayStation's September 2021 Showcase had a lot of reveals — largely for the PlayStation 5 — and here are the 10 biggest announcements.

When: TBD
Where: PlayStation 5

In addition to the return of Spider-Man, Insomniac Games is developing another Marvel game with the famous adamantium-clawed mutant (voice actor unknown or undecided), who seems to be his usual grouchy self in the first 40-second announcement teaser that finds him drinking after knocking out a whole bar's worth of guys unconscious.

When: TBD
Where: PC and PlayStation 5

One of the best Star Wars games ever made is coming to next-gen PlayStation. Funnily enough, KOTOR was an Xbox exclusive 20 years ago — and its remake will be PS5 console exclusive at launch. A lot of time has passed and hence, developers Aspyr, Sony, and Lucasfilm Games are rebuilding the game from the ground up, to ensure KOTOR's remake can stand next to today's releases.

Aspyr is best known for bringing Star Wars games to modern systems, including the original KOTOR to Mac and mobiles. For the KOTOR remake, it's brought on RPG veterans and members of the original KOTOR development team. The KOTOR remake was rumoured in January this year, and we finally have confirmation on who's behind it — and what shape it will take.

Set a few years after the events of 2018's God of War, the sequel will culminate Kratos and Atreus' journey in the Norselands, as they search for the old god of war Tyr and try to survive as conflict engulfs the Nine Realms with Ragnarök approaching. And they will have to contend with the wrath of both Freya (who lost her son Baldur) and Thor (who lost his sons and half-brother).

Atreus meanwhile is looking for answers (who Loki is, for instance) but his father Kratos warns him that those answers could lead to a war with Asgard. The God of War Ragnarök trailer has a bunch of gameplay too, showcasing the weapons Kratos will have at his disposal, and the kinds of monsters players will face on their journey through Midgard.

When: March 2022
Where: PlayStation 5 and Xbox Series S/X

The next-gen versions of Grand Theft Auto V have been delayed, Rockstar Games revealed at PlayStation Showcase, though that does mean PlayStation Plus members can continue to take advantage of the free GTA $1,000,000 in-game money each month on GTA Online's PS4 version for a few more months now (until launch in March 2022).

We did get a new trailer for GTA 5 on the PS5, which promises seamless character-switching in addition to the other features previously announced in better graphics, performance enhancements, and improved gameplay. And as for GTA Online, a standalone version will be available for free exclusively on PS5 for the first three months after launch.

Following Sony itself leaking Uncharted 4's coming to PC back in May, the PlayStation parent company confirmed Thursday that the fourth and final entry in Nathan Drake's adventure, Uncharted 4: A Thief's End, was getting a remaster for both PC and next-gen PS5. But it won't make that journey alone.

In fact, Uncharted 4 and the spin-off Uncharted: The Lost Legacy will be part of the Uncharted: Legacy of Thieves collection. While Naughty Dog will deliver the PS5 version in early 2022, Iron Galaxy is working on the PC port that will launch “shortly after” the PS5 version.

The GT Campaign mode is back for the next-gen version of Polyphony Digital's next racing game, and will take players across Europe, harkening back to the roots of the “Gran Turismo” term from the 17th century. Alongside, legendary circuits such as Trial Mountain and High-Speed Ring are coming back too.

Gran Turismo 7 will also expand on designing your car, photographing your car, tuning your car, and, of course, being able to grow your car collection. On the track, Polyphony Digital is promising real-life-driven weather simulations, drawing off tons of meteorological observation data that it has collected.

When: TBD
Where: PlayStation 5

A lone female paratrooper journeys down to a near-future desolate Earth that mankind was expelled from following a battle with invaders called the NA:tives, where you must learn how they attack to be able to counter with “precise timing”.

Parrying and evading is crucial in Project Eve, as that will help you build “Beta Gauge (BG)” which you can then use gain skills like piercing super armour, execute sweeping attacks, or interrupt enemy combos. You can see some of that in the first trailer.

The 11-year-old title is getting updated and repackaged for today's age, with the two story DLCs — The Signal and The Writer — also available in Alan Wake Remastered. Of course, you'll get 4K visuals at 60fps on next-gen consoles (limited to 4K or 60fps on PS4 Pro and Xbox One X), a major upgrade to what was originally a game for the Xbox 360 era.

Oh yes, it's also the first time that Alan Wake will cross the Microsoft threshold to be available on PlayStation devices. Some of you PlayStation gamers might have already met Alan Wake though, given he was part of Control's AWE expansion — yes, both Alan Wake and Control are part of developer's Remedy Connected Universe.