PlayStation 5 Price and Release Date Tipped via Amazon France Listing, May Start as Low as EUR 399

PlayStation 5 is said to be launched in holiday 2020 without an actual release date, but the leak suggests it will be November 20. 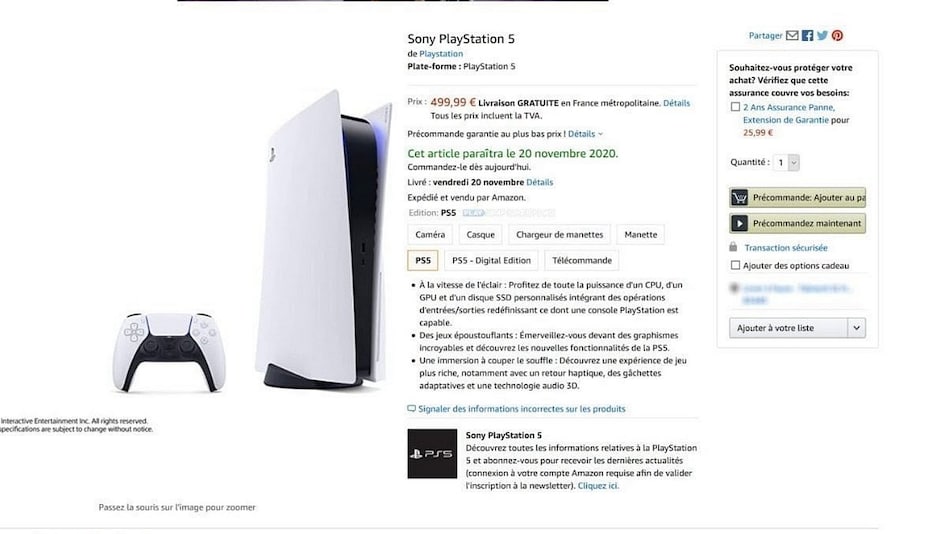 PlayStation 5 price and release date have been leaked through an e-commerce listing. The PS5 has been in the news ever since it's unveiling last week. First, it was because of its polarising design, then its UI and possible special editions, and now the pricing seems to have been leaked via an Amazon listing. As per a tweet by a known tipster, Amazon France allegedly listed the PS5 along with its price tag of EUR 499 (roughly Rs. 42,700), but the listing was taken down soon after. Additionally, the tipster who was able to screenshot the listing before it was taken down shared the price for the cheaper Digital Edition as well.

Tipster Ben Geskin shared an image of the now removed Amazon listing on Twitter that shows the price of the upcoming PlayStation 5. It states that the console with the disk drive will cost EUR 499 and will release on November 20. Additionally, he said that the Digital Edition of the PS5 costs EUR 399 (approximately Rs. 34,200). As the PS5 listing has been taken down and as of now shows “currently unavailable”, the pricing and release date details should not be considered as final.

The PlayStation 5 is set for a ‘holiday 2020' launch which would put it somewhere in the late November to December timeline. The November 20 date seen in the Amazon listing does fall in line with what Sony states, but, again, since the listing has been taken down, nothing can be said for certain. What we do know is that there will be two versions of the console with subtle changes between the two.

Recently, VP of UX Design for PlayStation, Matt MacLaurin teased the possible ‘radical' special editions of the PS5 but those comments were removed as well. MacLaurin also spoke about the UI redesign and how it has been completely reworked from the PS4.