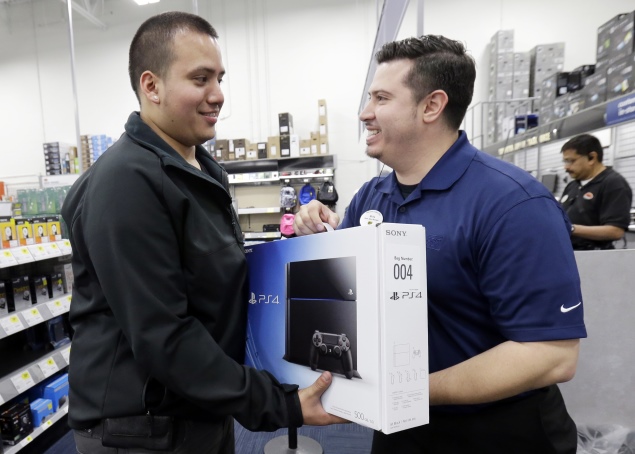 Sony Corp said on Sunday it had sold 1 million units of its new PlayStation 4 gaming console in the first 24 hours that it was available in the United States and Canada.

The console, which Sony is counting on to kick-start a revival of its consumer electronics business, went on sale on November 15.

Andrew House, the head of Sony Computer Entertainment, the unit of Sony that oversees PlayStation, said in a statement that "sales remain very strong in North America."

"We expect continued enthusiasm as we launch the PlayStation 4 in Europe and Latin America on November 29," House said.

Sony Corp had previously announced it had received more than 1 million advance orders for the console. Still, the initial sales figures are Sony's first salvo in a battle brewing with Microsoft Corp's Xbox One console, which goes on sale Nov 22. Sony is also hoping its console can help build a platform for recovery at the Japanese company's money-losing consumer electronics operations.

Sony is aiming to sell 5 million PS4 units by the end of its fiscal year that ends on March 31. Robert W. Baird & Co analyst Colin Sebastian has said he expects 2.5 million to 3 million PS4 shipments in the fourth quarter in North America.

Both the PS4, priced at $399 in the United States, and the Xbox One, with a price tag of $499, offer improved graphics for realistic effects, processors that allow faster game play and a slew of exclusive video games.