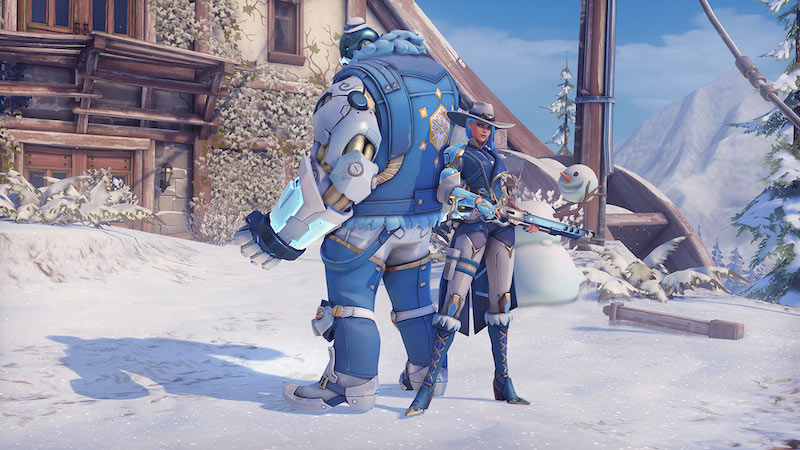 The Overwatch Winter Wonderland 2018 is now live on PS4, Xbox One, and Windows PC. Along with it comes different game modes as well as new skins, intros, and emotes. While some of the new Overwatch Winter Wonderland 2018 skins were made public by Blizzard days prior to the event there are a few more  discovered. As for new modes, Overwatch Winter Wonderland 2018 sees Yeti Hunter and Mei's Snowball Offensive being a part of the festivities. The former has five Meis up against a Winston decked up as a yeti with the yeti hunting for meat to unlock the Primal Rage ability making him immune to Mei's ice abilities while granting a power bonus to eliminate hunters. The latter has players taking down enemies with a single hit using Mei's Endothermic Blaster, which when empty, the nearest snow pile will provide the means to reload.

Certain Overwatch maps have been redone for the season too. These include King's Row, Hanamura, Black Forest, and Blizzard World.

Previously, Blizzard revealed that it has five to six Overwatch heroes in development at any given time. The Overwatch team has a variety of potential heroes to choose from to announce and add to the game. Though the thought process behind them isn't the same.

"There are five or six different hero prototypes being worked on at any given time," Overwatch Production Director Chacko Sonny said. "Some are driven by ideas like 'this would be a great addition to this class' and other times its driven by a cool sketch that we want to turn into [a hero]. I don't want to present a picture that they're all derived in the same way. The inspiration comes from many different places and there's a lot discussion at the time, figuring out what the next hero is and what's the right thing for the game at that point in time."

"They've all introduced something new and changed the way people play the game," he said. "There have been some cases where we tweak some things post-release, but we think there's some fertile ground to introduce some new hero designs. I know certainly with some of the prototypes that I've been playing recently, I'm super excited for what's coming up."