Nintendo unveils successor to the Wii 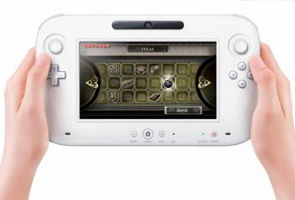 Highlights
Nintendo of Japan unveiled the prototype of its next home video game console, the successor to the Wii, on Tuesday at the annual E3 convention in Los Angeles.

But two days earlier, under extreme secrecy and security precautions, I got to try it for myself. My initial verdict: Nintendo has another hit on its hands, an innovative new system that has a chance to shake up electronic entertainment.

First, a few basic facts. The new system will be known as the Wii U, and the company plans to release it between April and December of next year. It will be compatible with existing Wii games and controllers, so consumers won't necessarily have to replace software and accessories they already have (unless they want to take advantage of the new system's capabilities). And unlike the Wii, which was stuck in the low-def era, the new console generates and displays graphics in full 1080p high-definition.

So here's the big deal: the wireless, hand-held controller for the new system includes a six-inch-wide touch-sensitive screen right there between your hands. No longer will playing a home console game mean looking at a television all the time. Instead, the controller screen can complement or replace what's on TV. If, for instance, one person in the household is playing a game on the living room television, and someone else wants to watch television, the gamer can switch play entirely to the controller, while the TV is flipped to the other show.

The implications are wide-ranging. In a rare joint interview with Satoru Iwata, Nintendo's president, and Shigeru Miyamoto, the company's eminent design chief (inventor of Mario and Zelda), Mr. Iwata suggested that the new system could usher in an age when television remote controls come with their own screens, allowing you to, say, browse channel listings or peruse additional information about the show you are watching without interrupting the on-screen picture.

Despite the new controller's superficial similarity to newly popular tablets like the Apple iPad, Mr. Miyamoto said that he had not used it and that his team had come up with the initial concept for the new system roughly four years ago, long before the iPad's debut. (Mr. Iwata, on the other hand, said he was basically an Apple fan.)

Nintendo and Apple stand alone at the top in finding new ways for consumer technology to entertain and inform. And that is because both companies actually put technology second in their design process. What comes first is the consumer experience; for these companies technology is useful only as it allows everyday people to have new experiences.

The new Nintendo console certainly offers those. The private preview demonstration -- in a huge, sealed metal box-room meant to repel all external surveillance and interference -- showed how the new system can deliver new sorts of gameplay.

First came something called Chase Mii. (Miis are the little cartoony avatars Wii players create to represent themselves.) In a sort of maze, up to four players do the chasing, while one player is chased. What's interesting is that the hunters, using normal Wii controllers, look at the television screen, while the quarry looks at the screen on the hand-held controller. Different players in the same room are now receiving and reacting to different game information at the same time.

Next came Battle Mii. One player, with the new controller, is flying around in a sort of hovercraft with lasers, while the other two players look at the TV as they try to shoot him down. The player with the hand-held screen can hide from and even surprise the pursuers because they can't see the small screen. The new controller is also motion-sensitive, so you can turn and aim just by twisting and turning the screen. You really want to stand so you can turn full circle. At times my back was to the TV as I focused on the new controller, while the other players, looking at the television, tried to hunt me down. Great fun.

Some games, however, will require players to switch their attention back and forth from the television to the screen in their hands. In the next demo, pirate ships were firing arrows at me, and I had to hold up the controller to block them. So I would see the arrows launched from the ships on the TV. Then I would raise the controller and see the arrows stick harmlessly to the "shield" I had raised.

After a segment filmed on the streets of Kyoto (Nintendo's home) that let me pan the controller like a camera a full 360 degrees, as well as up and down, the demonstration concluded with a high-def rendering of a battle scene from The Legend of Zelda: Twilight Princess, in which the hero, Link, battles a huge spider creature. After I got over the initial shock of seeing Link in HD (after decades of blocky renderings), I realized that the new system allowed me to decide for myself whether I wanted to display a map on the main TV or the touch screen. In other words, with the new system players can configure games to use the two screens (television and touch screen) as they please.

Mr. Iwata and Mr. Miyamoto also showed me a video about some of the new system's other features. The new controller includes a camera pointed at the user, so long-distance video conferencing capability over the Internet wasn't a huge surprise. The video also showed the controller being used to play a sort of Othello-like board game (though obviously without the board).

In another scene the controller, displaying a picture of a golf ball in a sand trap, was placed on the ground. The player, standing and holding a Wii wand like a golf club, could look down at the ball instead of merely imagining it, as in other golf games.

The executives were clear, however, that the controller does not process any game information itself; that is all done by the base console. So the new controller is not a portable game machine, à la Nintendo DS line.

As is true with the Wii, words don't really convey the visceral reality of the new system. You can't really "get it" until you try it yourself. But the combination of high-def graphics with this new screen-enhanced controller should put Nintendo back in the thick of the home console wars with Sony and Microsoft.

Nevertheless, because everything I saw was clearly a demo, the real question is how Nintendo and third-party developers will use the system to create games that consumers can't even imagine right now.

Millions of players will be anxiously waiting until next year to find out.
Comments