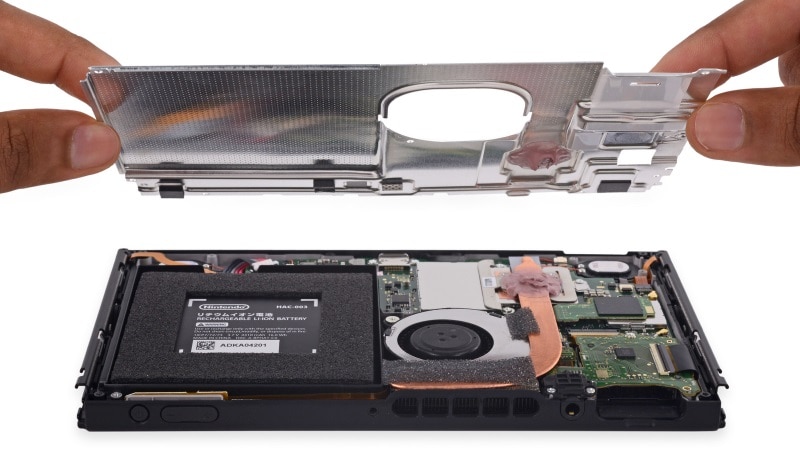 It seems like Nintendo's newly released Switch console has received thumbs up from the iFixit team as the device's teardown has revealed that it is highly-repairable and has received a reputable score of 8 out of 10 for repairability. Separately, the company has released a list of objects that might cause connectivity issues with the controllers for its new console.

First, let's move to the teardown of the device. The iFixit teardown of Nintendo Switch revealed that the portable gaming console makes use of tri-point screws, which as per iFixit team, is company's way of restricting easy access to internal hardware. On the inside, the Switch packs an Nvidia Tegra X1-based SoC coupled with 4GB of LPDDR4 DRAM.

The teardown revealed that the device houses a 16WHr battery and has stereo speakers on the inside. Apart from the battery, the design seems to be focused around the cooling system on the device. Considering that the heatpipe is secured merely by Philips screws, it is extremely easy to reapply thermal paste, iFixit points out.

As Nintendo Switch comes with Delta electronics fan, it could have potentially impacted the battery life of the device in a substantial manner. However, pointing to rumours that the graphics are "drastically underclocked" when the device is undocked, iFixit says that this process possibly enables the device to save its battery juice.

If you are aware of the iFixit teardowns, you will know that the team doesn't stop till every aspect of the device is snooped into. The teardown of the Joy-Cons revealed that the controllers come with 1.9WHr lithium-ion battery, Bluetooth, accelerometer/gyroscope, and a haptic "HD Rumble" motor, iFixit said in its teardown post.

Nintendo has further released the list of thing that might be causing connectivity issues faced by users with their Switch consoles, as per a report by The Verge. The list of the things includes cell phones, tablets, laptops, wireless headsets, wireless printers, microwaves, wireless speakers, cordless phones, USB 3.0-compatible devices such as hard drives, thumb drives, LAN adapters, etc. The company says that these things might be the reason for interference and preventing the Joy-Cons from connecting to the console, as per the report