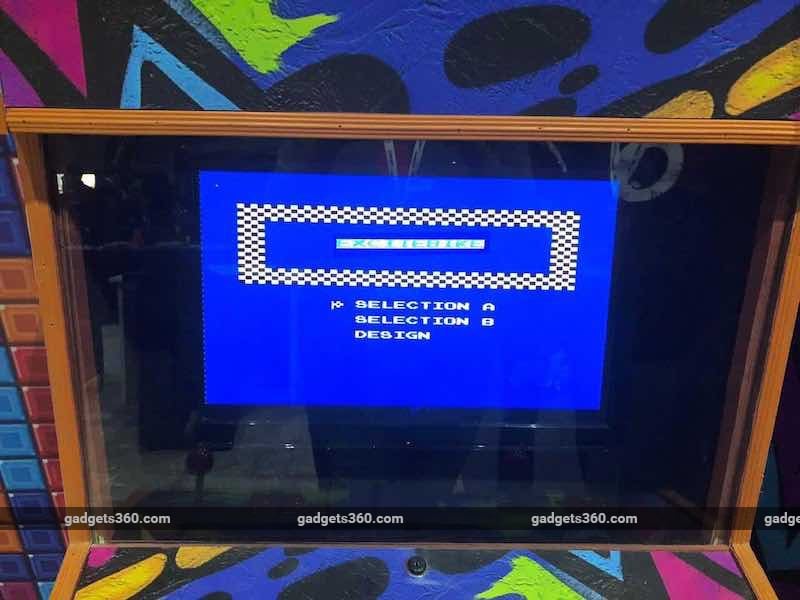 Dreamhack is the world's largest gaming festival with events usually in Europe and the US. Its first Asian outing was in Mumbai this weekend with Dreamhack Mumbai. Aside from hosting PUBG Mobile, Counter-Strike: Global Offensive, and Dota 2 tournaments, Dreamhack Mumbai also had a retro zone for attendees to try out older, simpler games.

This is in line with what Dreamhack does in other countries like Sweden and the US, complete with actual retro hardware including consoles like the SNES and GameCube, or fully-fledged arcade cabinets. At Dreamhack Mumbai, Gadgets 360 discovered that the retro section had games like Contra from Konami, as well as Ice Climber and ExciteBike from Nintendo. However, they were in the form of ROMs — the game's code as a file, as opposed to an actual cartridge of the game — running off clone consoles dressed up to look like arcade cabinets.

You could select what game to play from a menu touting '76,000 in 1' titles to choose from. That's a dead giveaway that no official cartridges were involved, considering such compilations were never officially made. This makes their legitimacy questionable at best, and at worst, a case of piracy at a high-profile event like Dreamhack.

Considering that Nintendo has been rather litigious regarding its older games, going as far as forcing shutdown of entire ROM websites, Gadgets 360 questioned Dreamhack Mumbai's organiser if there were any permissions taken to begin with.

"You ask and you ask again, and you keep asking till the time either someone says 'no' or says 'okay if it's just a community thing, go for it'," says Akshat Rathee CEO and Founder of Nodwin, the company organising Dreamhack Mumbai to Gadgets 360. "The fact that it is for the community, the fact that it is something which is there, it helps their brand. I'm not monetising any of those, it's not a commercial license. It's not like there's a coin-operated machine that I'm going and taking any kind of a revenue from them.”

"It is an emulator — Open Internet Project has gone and talked about it and, Creative Commons is a great example to go ahead and talk about it, this is not about licensing. This is about building this [Dreamhack Mumbai], and if they tell me tomorrow not to do it, I won't,” he added.

Although Rathee claims the games are running off an emulator, the lack of a back panel for these arcade cabinets show off what seem to be NES clone console. When pressed further he insisted they were being run off an emulator on a Rasberry Pi, though the pictures we obtained at the venue suggest otherwise.

While it might appear to be a case of being easier to ask for forgiveness than permission, we had to ask how Dreamhack Mumbai isn't profiting — indirectly or otherwise — from what seems to be pirated content. Reason being, entry to Dreamhack Mumbai isn't free. Tickets start from Rs. 499, and go all the way upto Rs. 14,999.

"Absolutely, that extension can go ahead and be applied to a lot of things,” Rathee says. "Like I'm actually charging people to watch Counter-Strike, or I'm actually charging people to play Counter-Strike. Most of the publishers across the world have clear demarcation on that as long as it's not directly attributed you can go ahead and hold an event."

Granted a retro game section may not garner a much attention as PUBG Mobile or Counter-Strike: Global Offensive, but it's disappointing that one of the world's biggest international events have its India debut marred by what seem to be pirated games.

Ashen Review: Its Dark Souls Formula Interpretation Might Be the Best One Yet