Nintendo 3DS to get bigger in July with an XL model 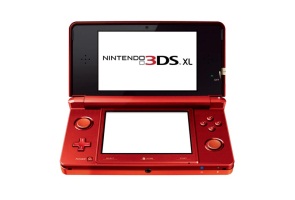 Nintendo of America has finally confirmed that the XL-sized Nintendo 3DS will be available in North America this summer.

The new 3DS XL will boast of a new 4.88 inch stereoscopic 3D display screen, an increase from the 3.53 inch screen in the current Nintendo 3DS model. The system's secondary display, which is touchscreen, will also see a size increase from 3 inches to 4.18 inches. It will also include a 4GB memory card.

Nintendo president Satoru Iwata also announced that Project Sora, the studio commanded by Masahiro Sakurai and developer of Super Smash Bros. Brawl for Wii, will work alongside Namco Bandai games in creating the fourth Smash Bros. game for the Nintendo Wii U and 3DS.

The announcement that Super Smash Bros. would be available for Wii U and 3DS was made during E3 2011, but Sakurai has said that development on the title is still in its prototype stages, thought he claims it's running well and is immensely fun.

Animal Crossing 3DS has also resurfaced and was revealed during the Japanese Nintendo Direct livestream. This game, which is a community-building franchise, is a place where the player character lives in a rural village populated with anthropomorphic animals. New visitors come to the player's town, i.e., the town they're a mayor of, using StreetPass. This feature is an update and connects players to each other, much like EA's Origin.

Just as residents could move between memory cards in or over Wi-Fi in installments previously, the players can swap neighbours with real-life neighbours by bringing their 3DS in close proximity to their 3DS. The game is due out in Japan this fall.