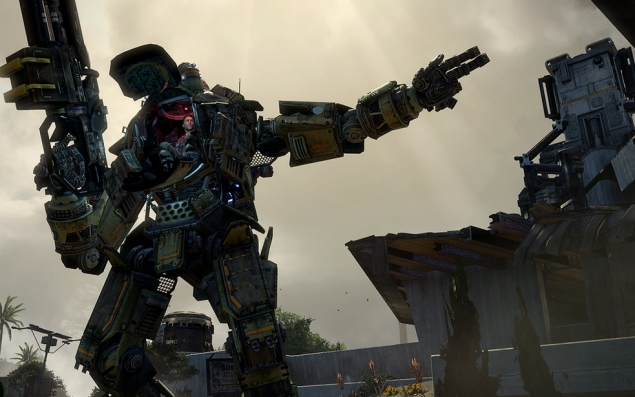 Tech titan Microsoft -- which has struggled to keep pace with Sony and its PlayStation 4 - is pinning its hopes on a new action video game, ironically named "Titanfall."

The highly anticipated game for the new generation Xbox One console lands this week in a major global release, with Microsoft is betting it will keep the company in the forefront of the battle for the living room and home entertainment.

"Titanfall appears to be the first must-have, first-person mutliplayer game that takes real advantage of the Xbox One's additional horsepower."

"Titanfall is really the big title for Xbox One," he said. "Game consoles live and die on blockbusters, so it is really important that the audience likes this game."

The game is produced by Respawn Entertainment, using designers of the "Call of Duty" blockbuster series, and distributed by Electronic Arts exclusively for Microsoft's Xbox and PC platforms. It carries a US price tag of $60.

Set in the near future on a distant war-torn part of space called "the frontier," Titanfall drops players in the middle of a conflict between the Interstellar Manufacturing Corporation and the Frontier Militia.

The main characters are the titans, described as "descendants of present-day fledgling military exoskeletons," and the pilots, who have varying degrees of certification.

Players can shift back and forth between pilot and titan, change tactics on the fly and attack or escape depending on the situation, according to the producers.

The release comes with Microsoft's Xbox One in intense battle with Sony and Nintendo's Wii U to be at the heart of digital home entertainment and consoles under pressure to prove their worth as people increasingly turn to smartphones or tablets for games and videos.

Microsoft and Sony both had strong holiday sales after the release of their new-generation consoles last year. But so far in 2014 PS4 has been leading, according to the research firm NPD.

Empire strikes back
Greengart said Microsoft is trying to show Xbox One has momentum, and Titanfall may help.

"It's not available on Sony, so this gives Microsoft a much-needed shot in the arm just as Sony has announced a nice spike in sales after PS4 went on sale in Japan," Greengart told AFP.

Microsoft doesn't want to be seen as left behind, he explained. "If consumers think one platform that has legs, sometimes it becomes so. Right now it looks like Sony has pulled ahead."

Titanfall is being released Tuesday in the Americas, Russia and parts of Asia, and on Thursday in India, Japan, Australia, New Zealand and most of Europe. The release will be Friday in Britain, Ireland and Portugal.

Even with challenges facing the console games sector, there have been notable recent successes including "Grand Theft Auto V," "Battlefield 4" "Just Dance 2014" and the latest installment of the "Call of Duty" franchise.

"Despite the growth of mobile games, a tremendous number of consumers are willing to spend serious money on the hardware and the gaming experience," Greengart said.

"But is this the last generation of consoles? That's the big question."

Greengart said Microsoft and others have failed so far to bring gaming into the "ecosystem" that will encourage consumers to use the full range of products including phones and tablets.

"Neither Microsoft nor Sony nor Nintendo have done a good job of bridging the living room with their mobile assets," he said.