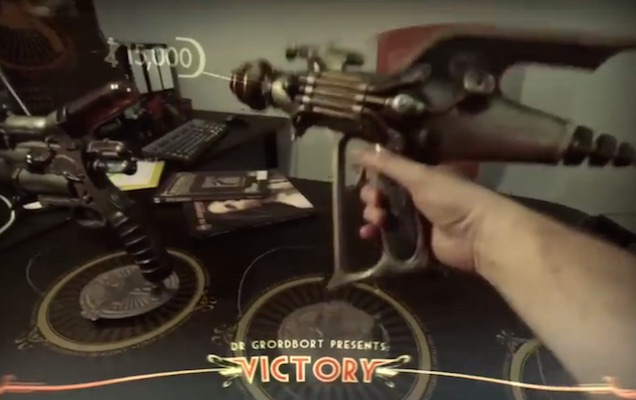 Magic Leap, an augmented reality (AR) company backed by Google, released a video for what could be an upcoming game based on its AR technology.

"Unfortunately, we couldn't make it to TED, but we wanted to share one of the things that we'd planned to share at the talk. This is a game we're playing around the office right now (no robots were harmed in the making of this video)," the description of the video reads. This highly-secretive startup caught headlines the world over when it received $542 million in funding lead by Google. This video is the first public glimpse of what the company is actually working on.

Titled Dr. Grordbort Presents Victory, it appears to be a first-person shooter that projects virtual enemy robots in real life surroundings. Sporting steampunk trappings the video showcases visceral gunplay, having you blast through a bunch of robots. While it appears to be a simple yet good looking game, little else is known at this juncture.

The video also showcases how the game is launched, featuring Magic Leap menus, YouTube and Gmail icons too. While the video description implies that the game is playable and the footage is perhaps taken from real gameplay, it looks too good to be true. Given that mockup videos from the past resembled very little of what actually came to fruition (Google Glass anyone?) ensures that this cannot be ruled out as a well executed proof of concept instead of actual gameplay.