Hitman: Absolution trailer accused of being 'misogynistic' and 'fetishistic' 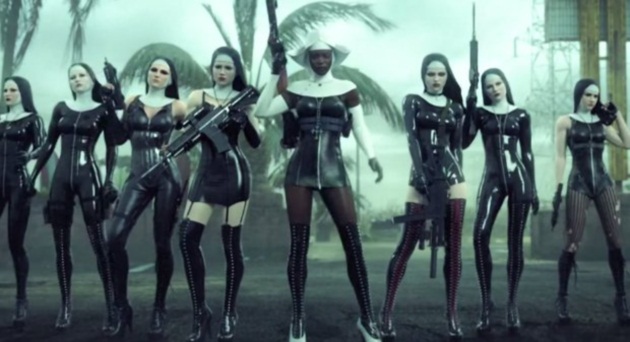 The much awaited Hitman: Absolution trailer ran into trouble at E3 2012, where it was showcased. The trailer is unsurprisingly violent, given the history of the Hitman series. But it seems to have attracted lots of negative attention from viewers who claim that such a game is not suitable for children at all.

The "Attack of the Saints" trailer begins with a bunch of nuns walking in the rain towards a motel in which Agent 47 is cleaning the blood off from his body. While he gets ready the nuns are seen shedding their cloaks by revealing scantily clad latex suits. They also possess various guns and line up outside the motel, evidently ready to kill him. The nun in the middle fires a rocket launcher and blows up the whole motel.

Amidst the burning flames, they advance, checking for any signs of life. The action slows down and Agent 47 takes out the nuns one by one until he is discovered. What then ensues is violent to say the least. He kills all of them either by shooting, stabbing and even breaking noses. But he too takes his fair share of cuts and bruises as he sets about dispatching his would-be assailants. A stark contrast to the earlier violence, he closes the eyes of the last nun and stands up amidst the fire. The last sequence has him packing a bunch of weapons, presumably the nuns', and driving away.

The trailer has been under fire for deliberately showing misogynistic material which lends itself towards bondage and male fetishistic desires. IGN's Keza MacDonald said, "This trailer panders to violence-worship and misogynistic desires that have nothing to do with the game, and that surely don't exist in the minds of Hitman fans."

In its defense, the trailer does open with a "PEGI 18" statement and warns that it "may contain content inappropriate for children", the operative word being "may". It is clearly obvious that such content is unwatchable for children.

"We're sorry that we offended people - that was truly not the intention of the trailer," Tore Blystad, game director commented. He said that he was extremely surprised at the reaction to the trailer and vehemently denied any intention in bringing out sexual violence against woman as a desired component in gaming in Hitman. He claimed the encounter to portray "one of any number of potential scenarios." Agent 47 does show a bit of respect while closing the eyes of the last nun.

Hitman: Absolution was also under fire for deliberately releasing such a gory trailer in order to hype the release and gain popularity. Blystad denied this outright and pointed out that religious and violent themes have been central to the Hitman franchise and have been inspired by the 60s and films by directors like Tarantino and Rodriguez for their extreme nature and independent outlook.

The game releases for PC on 1st August and 20th November for other platforms this year. Despite the rebuttal of the game crew, it doesn't look like the Hitman franchise can obtain absolution for this mistake quite yet.