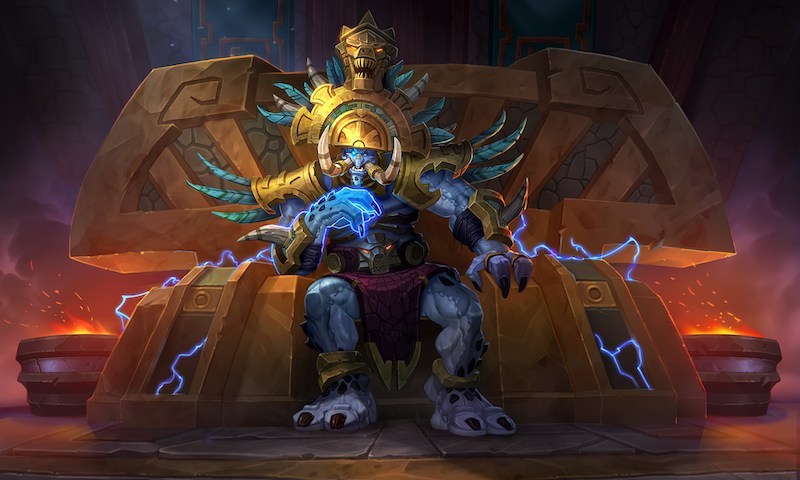 Digital card game Hearthstone gets a brand new expansion in Rastakhan's Rumble. Announced at BlizzCon 2018, it takes the game to Gurubashi Arena and is steeped in lore regarding trolls, their loa (ancient spirits worshipped by trolls in Hearthstone), the titular Rastakhan — king of trolls, and introduces new gameplay mechanics that reward flashy play style. Hearthstone Rastakhan's Rumble release date is December 4 and is priced at $20 (around Rs. 1,400) for the 17-pack Challenger's Bundle that includes a Ready to Rumble card back. There's a $50 (approximately Rs. 3,500) version that comes with a new playable Shaman Hero —King Rastakhan called the 50-pack Rumble Bundle.

Like recent Hearthstone expansions, there's a single-player campaign too allowing players to square off against the strongest troll champions in Rumble Run. It will be available soon after launch. What's more is, Hearthstone Rastakhan's Rumble features a new over the top finisher called Overkill. It rewards players for dealing extra damage to enemies.

With Hearthstone seeing expansions aplenty, Rastakhan's Rumble is yet another eclectic entry in Blizzard's card game. It's available for pre-order on Android, iOS, Windows PC, and macOS right now.

Hearthstone Rastakhan's Rumble follows up the last Hearthstone expansion, Puzzle Lab which we lauded for its superlative single-player experience particularly if you're the sort who is coming back to the game after a long time.