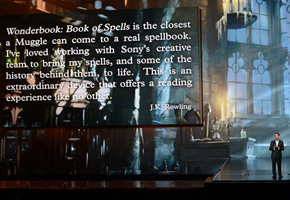 Sony Computer Entertainment chief Andrew House said that the Japanese entertainment titan was collaborating with Rowling and her online Pottermore world on the first title in what will be a vast "Wonderbooks" library.

"This takes you on a journey of learning magic, like a student at Hogwarts," he said, referring to the fictional school of sorcery from Harry Potter books.

"Welcome to the re-invention of the storybook."

Players used PlayStation Move motion-sensing controllers as wands as they flipped through pages of the book and learned spells.

PlayStation Eye camera put students into on-screen scenes that then tested their abilities to set things ablaze or levitate objects in settings reminiscent of Hogwarts School of Witchcraft and Wizardry.

"Book of Spells is the closest a Muggle can come to a real spell book," Rowling said in a message shared by House at a press event in Los Angeles on the eve before the start of the premier E3 videogame show in Los Angeles.

Moonbot Studios, which won an Academy Award for best animated short film for "The Fantastic Flying Books of Mr. Morris Lessmore," will add a classic noir style detective book titled Diggs Nightcrawler to the Wonderbooks library, according to Sony.

"We are working with some of the world's best developers and authors to make a broad library of content," House said.

"Imagine walking with dinosaurs or sailing the seven seas to explore an atlas."