GTA V came out in 2013 and has been among the most popular games owing to its ever expanding online universe. 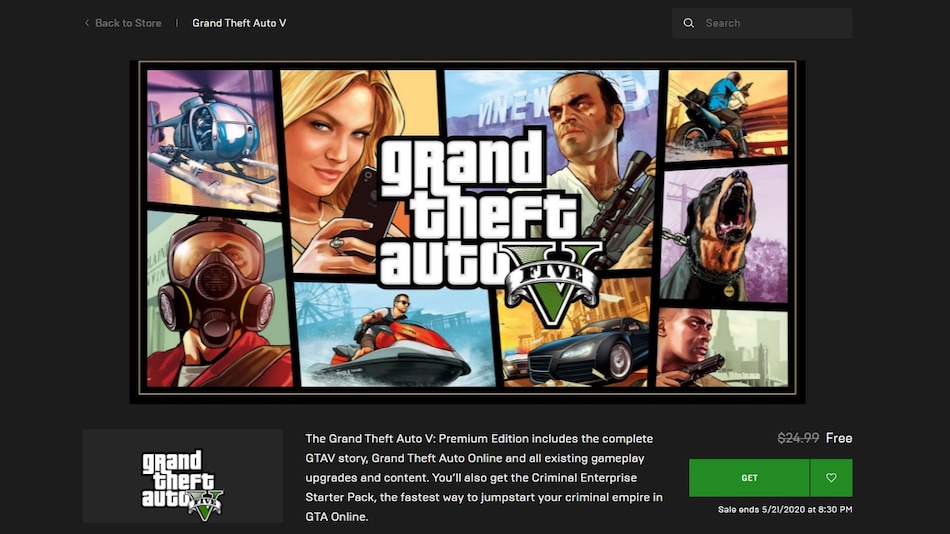 Epic Games Store, the digital video game marketplace, listed the highly popular game Grand Theft Auto V (GTA V) for free on May 14. Shortly after the game went online for free, a surge in users led to heavy traffic that caused slowdowns and error messages on the Epic Store website and launcher app. Epic acknowledged the issues and said it is working on fixing them. As per the most recent tweet by the Epic Games Store official account, most of the users should be able to access the Epic Games Store and the launcher. Additionally, a post on Reddit states that the next set of free games coming to the Epic store may have already leaked.

Epic Games Store often gives out free games as a ‘mystery game' that users can download and keep forever. This time, it put up Grand Theft Auto V as the free game till May 21 and naturally, a large number of people rushed to the online store website and launcher app to get the game. This caused heavy traffic on Epic's servers, which led to slowdowns, errors, and the Epic Games Launcher crashing. Owing to the popularity of GTA V even though it is 7 years old, the swarm of users still wanting to download the game comes as no surprise. GTA V is available for free in India as well and you have till May 21 to download the game and keep it forever.

In a tweet shortly after the issues were reported by the users, Epic acknowledged the problems and said that it was working on a fix. It followed up with another tweet suggesting there were still some issues being faced by some users. Finally, as of the morning of May 15, the company shared that it has “deployed updates to provide resolution for these issues,” and that most users should be able to access the Epic Games Store website and launcher. “We'll continue to monitor traffic and provide updates if further issues are encountered. Thank you for your continued patience!”, the tweet added.

Further, an image shared on Reddit seems to leak the upcoming free games on the Epic Games Store. These include Civilization 6 expected to come on May 21, Borderlands - The Handsome Collection expected on May 28, and ARK Survival Evolved expected on June 4. All three of these games are quite popular and if this leak turns out to be true, a lot of people will be flocking to the Epic Games Store once again.