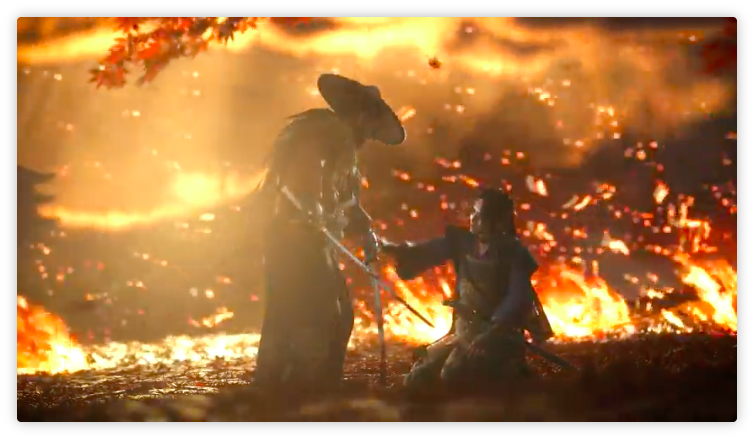 The second game in Sony’s E3 2018 showcase was Ghost of Tsushima. The trailer began with the protagonist walking in grasslands on what is shown to be day nine of the Mongol invasion. He hears people crying and wailing, before proceeding through the Otsuna Grasslands on his horse.. As the character picks up speed we see the grasslands appearing blurry and the camera appears to move a bit to the right. The lead character is called Jin and he then takes on a few soldiers who are seen killing locals.

The combat is sword-based and appears fluid in this scene as Jin kills five soldiers. He is then joined by an archer woman who helps him take out two more soldiers stealthily. Jin then climbs on top of a building and walks slowly towards the primary target — a monk who is inside a temple. Soldiers appear to be harassing the monk and ransacking his temple, when Jin lands from above and quickly kills of three soldiers. The enemies are established to be Mongols at this point as Jin’s companion tries to kill the monk who Jin tries to guard. There is hardly any UI or indicators in the gameplay footage we saw at E3, and we noticed elements such as a vivid world that looks gorgeous, some great sound effects, sword stances, and fantastic combat. You’ll have to master parrying and guarding yourself from enemy attacks to win battles in Ghost of Tsushima. The trailer also hints at a complex storyline in the game as Jin fights his friend, defeats her, then hands her a weapon and tries to get her to fight “the real enemies” — Mongols.