Get Leo DiCaprio His Elusive Oscar in This Arcade Game 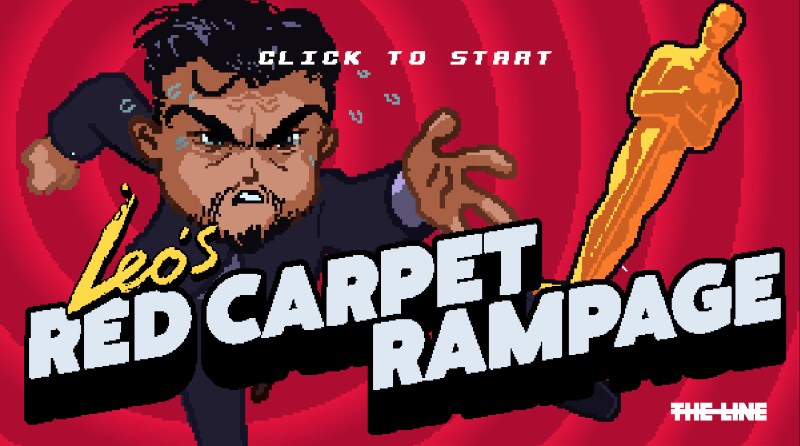 Leonardo DiCaprio, the 41-year-old actor known for his work in Titanic, The Departed, Inception, and The Wolf of Wall Street among others, is now the lead in an arcade-style side-scrolling video game called "Leo's Red Carpet Rampage".

Over the years, DiCaprio has repeatedly failed to win an Academy Award, also known as an Oscar. He's been nominated four times in the Best Actor category - in 2004 for The Aviator, in 2006 for Blood Diamond, in 2013 for The Wolf of Wall Street and in 2015 for The Revenant - but is yet to win. The winners for 2015 are yet to be decided though, with the 88th Academy Awards scheduled for next Sunday, February 28.

It is with his unfortunate Oscar streak in mind that London-based animation collective The Line decided to make this three-button game that only works in your browser. As Leo, you must rush down the red carpet - collecting a fair share of Golden Globes, jumping over paparazzi and icebergs, crawling to his Lamborghini while on Quaaludes - all in the pursuit of that elusive Oscar.

Meanwhile, DiCaprio has over the years racked up 44 award wins across the board, including 3 Golden Globes, 2 Critics' Choice Awards, one SAG award, and a Bafta this previous Sunday to add to the collection. The Revenant, a 19th-century thriller starring DiCaprio as the lead along with Tom Hardy, Domhnall Gleeson, and Will Poulter is slated for release in India on February 26.

(Also see: Hollywood Can Now Prove a Movie Is 'Heart-Pounding')