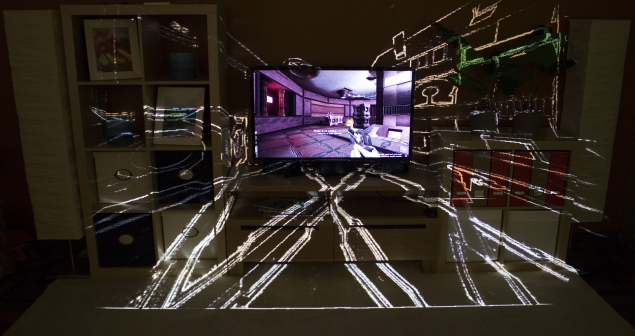 The next generation of gaming is nearly here, but what about the generation after that one?

Sony and Microsoft are launching their new super-powered consoles in the coming weeks. However, gamemakers at last week's Game Developers Conference Next in Los Angeles were already contemplating outside-the-box innovations - from wearable controllers to illuminated living rooms - that might follow the PlayStation 4 and Xbox One.

Here's a glimpse at five big ideas pondered at GDC Next:

Seeing is believing
While the virtual reality headset seemed to go the way of the beeper in 1990s, updated takes on that technology have emerged that could make a big impact on the way players view virtual worlds in the future. Google Glass, Oculus Rift and CastAR are already giving early adopters a peek at images in 3D or projected in real life - all without a TV screen.

Time warp
Games have long explored what's physically impossible in the real world, like instantly teleporting across space in the first-person puzzler "Portal" or effortlessly bending time in the 2D platformer "Braid." With higher definition graphics, new controllers and increased fidelity, expect game designers to continue to push the limits of make-believe reality.

If you build it
The success of "Skylanders" and "Disney Infinity" has proven gamers want to merge physical and virtual worlds. The next evolution for players might be to create their very own toys or accessories utilizing at-home 3D printing technology. Imagine scanning an old-school "Star Wars" figure, printing a new version then sending it to a virtual galaxy far, far away.

Touchy subjects
Touchscreens have revolutionized the way users interact with devices, but their slick surfaces don't always make for the best game controllers. Advancements in technology that physically respond to touch - called "haptic touch" - combined with motion detection and augmented reality could bring interfaces imagined in "Iron Man" and "Minority Report" to life.

Realty check
As handheld devices become more pervasive and projection technology is more accessible, interactivity will likely continue to leap off TV screens, as illustrated earlier this year by Microsoft's IllumiRoom project, a conceptual system that combined a projector and Kinect sensor to augment areas surrounding a TV screen with dazzling projected visualizations.