Game consoles are moving into the next generation 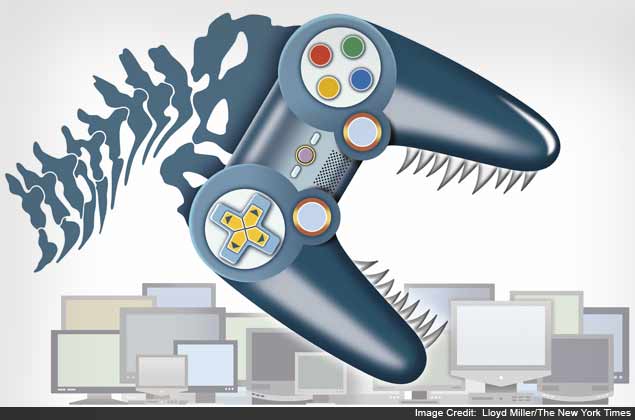 On a gray day here last week, Microsoft officials welcomed a few hundred people into a tent pitched on a soccer field at the company's headquarters. Microsoft was unveiling an appliance, the Xbox One, which takes up about as much room as a lazy house cat and is designed to be plugged into a television.

It is the latest in a generational line of Xboxes, PlayStations and Nintendos to arrive in the past quarter-century. To dedicated gamers, each generation is as relevant and real a part of the calendar as an Olympiad or a presidential election cycle. Gamers argue about which one is the best. But the previous generation has stretched on longer than those before it and segues into the next at a time when there might be a meteor in the sky.

Serious people discuss whether these new consoles, facing competition from cellphones and tablets, might be endangered. Untethered from a television, mobile devices - which draw hundreds of millions of people to distraction with "Angry Birds," "Clash of Clans" and "Temple Run" - make gaming more convenient. The home console's appeal is dependent on the notion that gaming on a television still matters.

The industry is at the start of its eighth console generation: the Xbox One, Sony's PlayStation 4 and Nintendo's Wii U. The Microsoft and Sony machines are planned for release this year; Nintendo's device shipped in November, for the 2012 holiday season. Generations typically last a half-decade and are preceded by the promise that the new, ever more powerful devices will improve the world's youngest major creative medium, make their manufacturers a lot of money and in some way reconfigure living rooms across the world.

The point of an Xbox is to "bring the things you love to life," Don Mattrick, Microsoft's chief of interactive entertainment, said in an interview outside the Xbox One tent. "You love entertainment. You love TV. You love games. This is going to be the premium experience for enjoying those things."

Mattrick's challenge, like that of his counterparts at Sony and Nintendo, is to convince people that the game console and its ubiquitous controllers aren't going the way of the landline telephone or, in a threat that hits closer to home, the arcade machine. Just a few decades ago the home console was an upstart. By the late 1990s it was unseating arcade machines, gobbling the public's attention the way "Pac-Man" used to gobble all those dots (and quarters). Consoles like the Nintendo 64 and the Sony PlayStation brought the graphics and sounds of arcade-caliber gaming home and improved on them by offering richer, deeper worlds to play in.

The outgoing console generation started in 2005 with Microsoft's Xbox 360. Sony's PlayStation 3 followed a year later, as did Nintendo's Wii, with a motion-sensitive controller that turned it into a cultural phenomenon. In an age when iPhones are displaced every year, 2005-era console technology is nearly Paleolithic. It's a testament to the ability of programmers to squeeze performance out of an established hardware standard that new games on the Xbox 360 can still look and sound impressive in 2013.

Proponents of consoles argue that most mobile games, while increasing in appeal, lack key qualities of console gaming. "They're very bite-sized, very light on the story, very light on the emotions and the different things that a proper sit-down-on-your-couch-with-a-50-inch-screen-and-surround-sound experience can provide," said Scott Rohde, who leads the highly regarded in-house American game development studios for Sony PlayStation.

Microsoft's vision for the Xbox One extends beyond gaming. It is designed to switch from playing games to showing cable television with a snap of the fingers. Older consoles simply played games, but newer ones are designed to play television shows and movies.

That shift in focus has been gradual but definite at Microsoft, which added one of its most popular features to the Xbox 360, the ability to stream movies through Netflix, in 2008. At the tent event Mattrick, a former video game designer, announced a deal with the NFL that would empower the Xbox One to display an interactive fantasy league application on the right side of a TV while the left side displayed a live football game.

Rohde and Mattrick may be rivals in the current console generation, but they are joined by colleagues on both sides who argue that the increased horsepower and technical flash of new consoles can make video game characters appear to be more realistic and increase a player's emotional engagement. They suggest that better technology enables greater aesthetic achievement in their medium. This is by no means a settled point, nor even a universally shared belief of what it takes to advance the artistry of games. That view was in fact mocked at a recent conference for game creators by the independent developer Chris Hecker, who played a reel of proclamations by top console game developers who claimed that more powerful technology would beget more emotionally sophisticated gaming.

Rohde acknowledged that one of the more emotionally affecting games of last year, a graphically simple, narrative-heavy spinoff of the zombie comic and TV show "The Walking Dead," could run on numerous platforms, from consoles to cellphones. He considers that game an exception and cited the PlayStation 3's forthcoming "The Last of Us," a more graphically complex survival adventure set in a nearly photorealistic ruined United States, as an example that requires a powerful console.

Rohde also pointed to economics, saying that the low prices of many mobile games (around $1) restrict development budgets to a fraction of those for lavish $60 console games.

Microsoft, Sony and Nintendo have all begun courting independent game creators for their consoles. A common selection for 2012 game of the year was a smaller PlayStation 3 exclusive called "Journey," a quiet, surreal nature-walk of a game made by a small team of developers whom Sony signed out of graduate school. One of the most popular games on the Xbox 360 last year was the console's version of the PC hit "Minecraft," a building-block game designed nearly single-handedly by a developer in Sweden known as Notch.

For the Xbox One, Mattrick speaks of a smarter device that recognizes its users and adapts to them. His team has integrated the console with a new generation of Microsoft's successful visual and aural sensor Kinect. A result is something that might seem more futuristic and also a bit strange. The new Kinect can track gestures, read a player's heart rate by looking at his or her face, and respond to verbal commands. It must be plugged in for the Xbox One to operate, though the entire system can be turned off to alleviate concerns that it might spy on people.

The PlayStation 4 and the Xbox One are both expected to be released this fall, probably up against new devices from Apple and other mobile competitors. Games are likely to be popular on all of those machines.

"What's so exciting about this particular time in the history of gaming is that it's more wild than it's ever been," Rohde said. "No one on the planet knows quite where it's going to go."