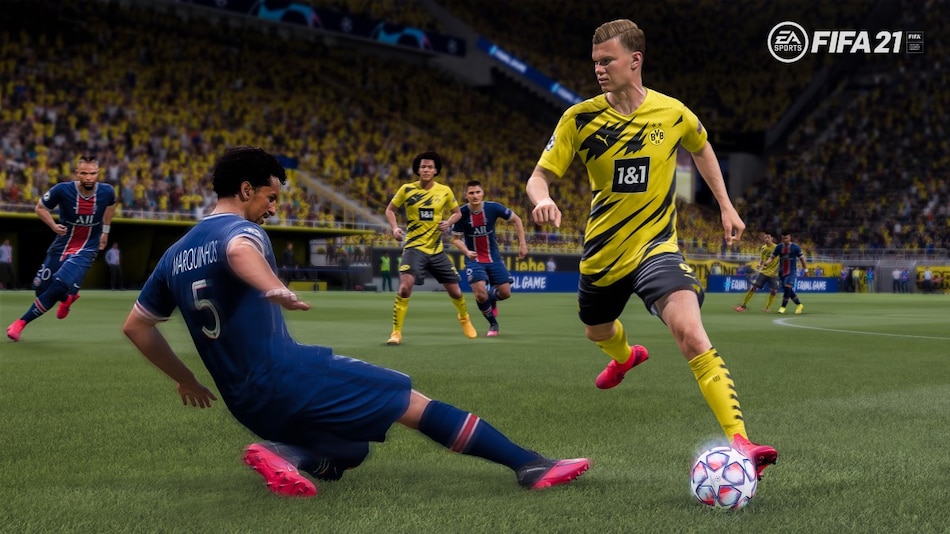 FIFA 21 gameplay trailer is here, and it details the new gameplay features that EA Sports had previously announced, giving us an insight into how players can use them and what their impact on FIFA 21 will be. This includes improved dribbling (termed in-game as “Agile Dribbling”), positioning (“Positioning Awareness”), and collisions (“Natural Collision System”), manual runs (“Creative Runs”) and headers, and a tougher challenge against the AI (“Competitor Mode”). Additionally, the FIFA 21 gameplay trailer also reveals the introduction of “Rewind” feature, which will let you undo events and take another go at the same move in the middle of a match.

Activated with the right shoulder button and the left stick, “Agile Dribbling” offers closer control of the ball, helping you get past defenders or make room for that crucial pass. To ease the transition for newcomers, FIFA 21 will also have “Contextual Agile Dribbling” where your players will automatically perform Agile Dribbles in certain situations. This will be turned on by default but can be switched off.

“Agile Dribbling” on FIFA 21 is further boosted by the arrival of two new skill moves: bridge dribble and ball roll fake. To help ensure that the new mechanism is not overpowered, FIFA 21 will let defenders use their strength and agility to counter opponent's moves. To perform a shoulder challenge or get in the way of the attacker and the ball, use the left trigger button when you're next to the opponent.

With “Creative Runs”, FIFA 21 players can now send AI teammates on manual runs, a feature that has been available on the rival Konami's Pro Evolution Soccer titles for a few years. But FIFA 21 updates that by allowing you to lock onto a player. That means after you pass the ball, the AI will play by itself while you position yourself and then ask for the ball back. You can also jump to other players without the ball using the right stick.

Two types of “Creative Runs” are on offer in FIFA 21: “Directed Pass and Go” and “Directed Runs”. With the former, simply flick the right stick in the direction you want your AI teammate to go. “Directed Pass and Go” works for all kinds of passes, including short pass, lob pass, through balls, and crosses. As for “Directed Runs”, hold down the left shoulder button and use the right stick for direction. You can also call them towards yourself first with right shoulder button and right stick.

FIFA 21 also brings “Positioning Awareness”, which is meant to help you across the pitch. That includes defenders recognising danger and doing a better job of blocking shots, midfielders ready and waiting to cut passes, and attackers staying onside while you get in position to make that assist. But it's still unclear if the last of those will correct one-two passes on FIFA, wherein the first player keeps on sprinting even beyond the offside line once you've triggered the move.

The “Natural Collision System” aims to improve how defence versus attack free-for-alls pan out. FIFA 21 is promising players will run into each other and fall over less. Instead, they will minimise head-on collisions and try jumping over a fallen player.

That leaves several other FIFA 21 changes that have been grouped under “Fundamentals of Football”. It includes the introduction of manual headers — available in FIFA 21 game settings — which will be mandatory in all competitive modes, be it Ultimate Team (Champions, Rivals, and Squad Battles), Seasons, Co-Op Seasons, Online Friendlies, and Pro Clubs.

FIFA 21 will also have a new “Competitor Mode” featuring an AI that has learnt from the best FIFA pro-players. Sounds like machine learning.

And lastly, players can rewind missed opportunities with “Gameplay Rewind” on FIFA 21. The feature is limited to Kick-Off — offline solo or couch multiplayer — and won't be available online, naturally.

FIFA 21 is out October 9 on PC, PS4, and Xbox One. Early access starts October 1 with EA / Origin Access, and October 6 with FIFA 21 “Champions” and “Ultimate” Editions.