A good day for PC gamers in India. 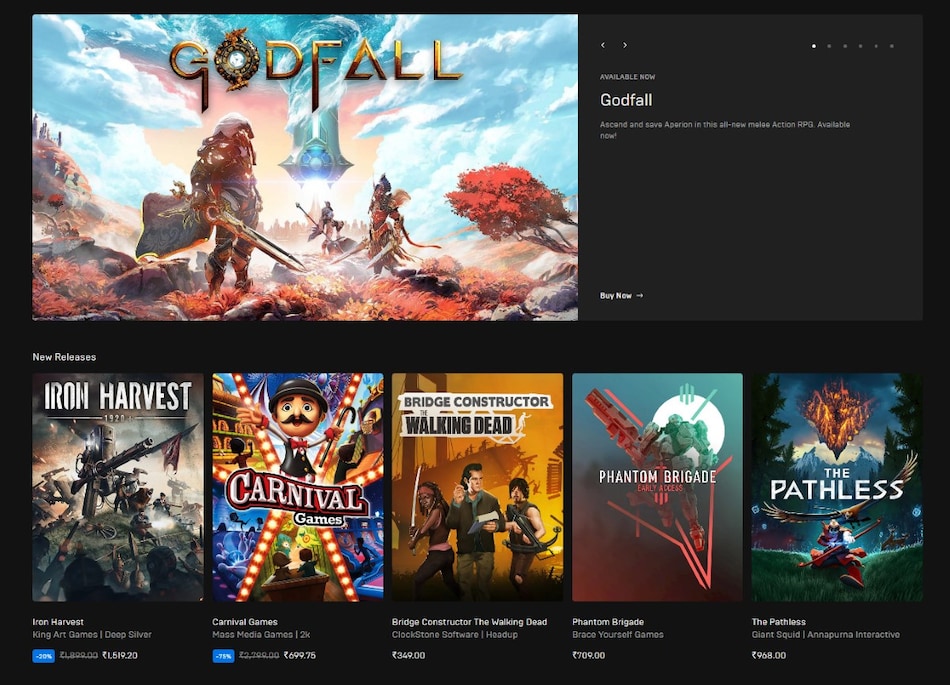 Epic Games Store now supports pricing in Indian Rupee (INR). This is great news for PC gamers in India, as you don't have to worry about US dollar (USD) to rupee conversions, or the associated fees that Indian banks charge for purchasing something in international currencies. Epic Games Store's INR support arrives ahead of schedule, as it was originally planned to be rolled out in 2021. With that, Epic Games Store seems to be allowing localised pricing as well, though as always, it's in the hands of the developer.

Ubisoft titles such as Assassin's Creed Valhalla and Watch Dogs: Legion, that weren't available in INR to PC gamers at all previously, come in at Rs. 2,999. It's not what you would call localised, but it's still better than the $44 (about Rs. 3,260) you had to play earlier on Epic Games Store, or the EUR 60 (about Rs. 5,280) that you still have to pay on the Ubisoft Store that doesn't support INR pricing. New games such as Iron Harvest (Rs. 1,899) or Bridge Constructor: The Walking Dead (Rs. 349) are in line with or around Steam prices.

Not all prices are as competitive. The highly-anticipated Cyberpunk 2077 is Rs. 2,999 on Steam, but Rs. 3,205 on Epic Games Store. (It's another matter altogether that Cyberpunk 2077 is one of the rare PC games available at retail in India, and also more affordable at Rs. 2,499.)

But hey, at least you now have the option of directly comparing prices, between Steam and Epic Games Store, something that wasn't available earlier for PC gamers in India. Along with Ubisoft Store, CD Projekt Red's GOG.com continues to be stuck in USD pricing. Steam brought INR support in late 2015. EA's Origin also allows you to buy PC games in Indian rupee.

Now that INR is available on Epic Games Store, hopefully more payment method choices will be next in line. This is part of Epic Games Store' roadmap under “future development,” after all.

The Mako Reactor was the first to report on Epic Games Store's INR support.