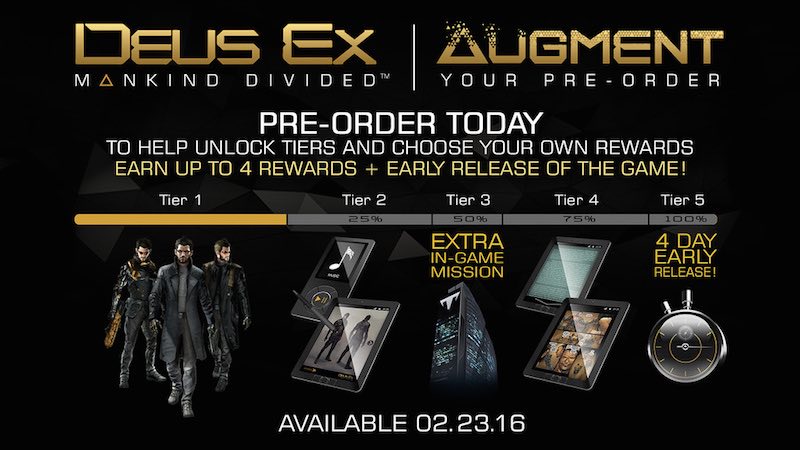 Sequel to 2010's Deus Ex: Human Revolution, Deus Ex: Mankind Divided, has a release date. You can pick it up on February 23, 2016. The news comes by the way of the European PlayStation blog uncovered by enthusiast gaming forum, NeoGAF.

"The team has been working hard on the game, and even if its release is still a few months away, having a set date where we know you'll get a chance to experience the game first hand is a huge motivation for all of us," the blog post said.

And in an odd turn of events, the post highlights an incentive to pre-order the game digitally by allowing fans to play the game four days ahead of time.

"The very last tier is one of a kind, as its reward will be an early release of the game, four days prior to its scheduled launch! For more details on Augment your Pre-order, check out www.augmentyourpreorder.com."

At the time of writing this, www.augmentyourpreorder.com was not accessible. Other pre-order tiers include an extra mission, a digital comic, and a sampler of the game's music. In addition to this, there is a collector's edition that has a nine-inch figurine of Adam Jensen, a limited steelbook, and a 48-page art book.

The post outlines a February 23 release date for the PS4. Given Eidos Montreal's track record, it would be safe to say that the Xbox One and PC versions would be out at the same time. With Mirror's Edge: Catalyst, XCOM 2 and now Deus Ex: Mankind Divided slated for February, the month looks to be one replete of heavy hitters that would resemble a November lineup. Not that we're complaining.

At Gamescom 2015 we spoke to the development team on Deus Ex: Mankind Divided at length. Look out for our interview on what to expect from the latest entry in the series soon.