At its peak, there were 1,024,845 concurrent players playing Counter-Strike: Global Offensive. 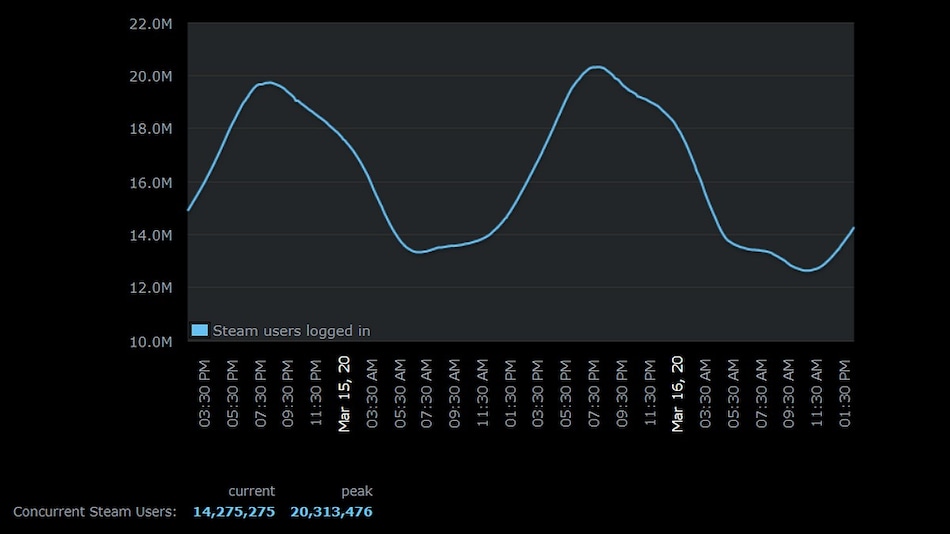 Steam saw the highest number of concurrent users on March 15

Steam, one of the most popular digital stores for games, has set a new record in terms of concurrent users, possibly because of coronavirus enforced quarantine. According to a post from third party tracker SteamDB, and verified by Steam's own stats, there were 20 million concurrent online users on the platform at around 8pm IST, on March 15. This is the highest number of concurrent users ever recorded on Steam. The Twitter post also states this might be because of the coronavirus pandemic which has caused people to stay in-doors. The previous record was of 18.8 million users, last month.

The data was provided by Steam's own statistics tracker which shows a peak of 20,313,476 concurrent users at around 8pm yesterday. A tweet posted by SteamDB states there were 6.2 million players in-game at the same time. It also states that the reason behind this spike in numbers might be because people have been advised to stay home in an attempt to stop the spread of coronavirus.

IGN states the previous record for concurrent users on Steam was around 18,801,944 as of last month. Which means the new record adds more than 1 million concurrent users.

Coming to the games, Counter-Strike: Global Offensive had 1,024,845 concurrent players at its peak which was followed by 701,632 players on Dota 2. The Playerunknown's Battlegrounds reached a peak of 515,050 concurrent players. Some of the other games in this list were Tom Clancy's Rainbow Six Siege, Grand Theft Auto V, and Destiny 2, among others.

Coronavirus has forced several companies to ask their employees to work from their homes to stop large number of people from gathering in one place. Movie theatres, colleges, and some other areas that see large public gatherings have also been shut down.