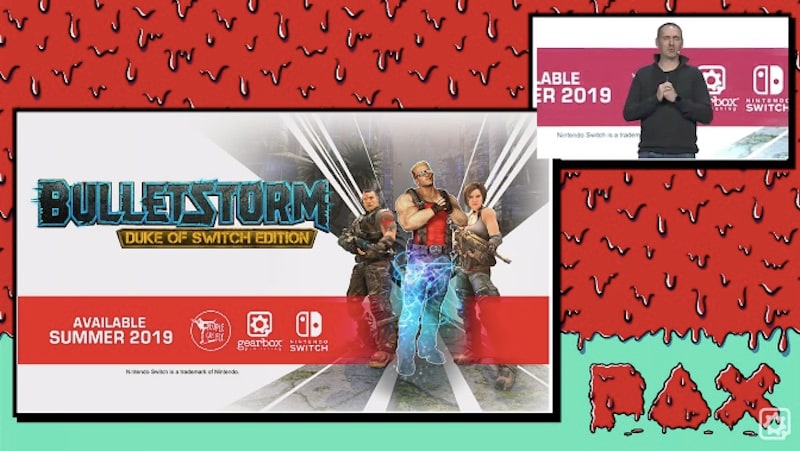 At PAX East 2019, Gearbox Software announced Bulletstorm Duke of Switch Edition for the Nintendo Switch. The Duke Nukem tie-up has been made possible by the new publisher, Gearbox, which holds the license to the character and is working together with original Bulletstorm developer People Can Fly on this version of the game. A summer 2019 release window was revealed with an exact release date soon.

It might be surprising to some that Gearbox is interested in remastering a game that ended up being a commercial failure upon launch in 2011, even after being praised by critics – who praised its goofy sci-fi cut-scenes filled with dark humour, and the creative and complex Skillshot-based combat system. That did help Bulletstorm, originally published by Epic Games, garner a bit of cult following over the years though.

Bulletstorm Duke of Switch Edition includes all previously-released content, six new levels for Echo Mode, and a new “Overkill” campaign mode that will give you unrestricted weapons and Skillshots, which are bonuses for creative killing techniques. And much like Bulletstorm: Full Clip Edition for PS4 and Xbox One, you can play the entire game as Duke Nukem.

It's interesting to see Bulletstorm grace the Switch. More so when its Xbox One release didn't get previously promised updates to improve image quality and performance for the Xbox One X alongside Firewatch and Rime.

The removal of these games from the Xbox One X enhancements list was spotted by eagle-eyed users of popular gaming forum ResetEra.

"I understand there are financial and logistical issues in updating these games for the X, but if they're going to advertise these features for so long they should at least make an announcement detailing the cancellation," claims one post. "This just feels like trying to sweep it under the rug."