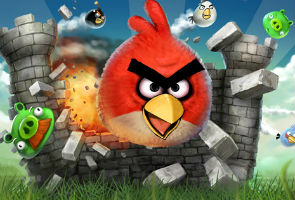 Addictive game "Angry Birds" along with the inventor of the mobile phone were among those honoured late Monday at a ceremony known for testing winners' creativity by limiting acceptance speeches to five words.

"Person of the year, ironic," a computerized voice speaking for the machine said while receiving a Webby from show host actress Lisa Kudrow, who suggested the machine jazz up its image by dating an iPad.

"That was clever," Kudrow retorted. "You're quite the word processor."

At more serious moments, awards paid tribute to Egyptian protesters who used Twitter and Facebook in a bold uprising to oust Egyptian president Hosni Mubarak and anUshahidi service launched to map violence that followed a 2008 election in Kenya.

Chris Anderson, curator of prestigious TED gatherings devoted to making the world a better place, presented a Webby to a Kenya-born Ushahidi.com platform for using the Internet to share stories in brutal situations.

Bargain-finding service Groupon won a Webby for "Breakout of the Year," and explained the company's name was short for "group" and "coupon."

Pandora radiowelcomed its Webby with "Better than an IPO, almost."

The California-based Internet radio service has filed plans with US regulators for an initial public offering of stock.
Kudrow jokingly likened the rapid fire, terse nature of the ceremony to the Chatroulette website known for randomly pairing people for video chats.

"It's like Chatroulette, but no one shows their penis," Kudrow quipped, referring to Congressman Anthony Weiner's online escapades. "This isn't Congress."

The show streamed live online at YouTube and Facebook finished with a Webby presented to Rovio for globally popular mobile game "Angry Birds."

Rovio chief executive Peter Vesterbacka cavorted in dressed like one of the green pigs whose egg-stealing makes them targets for birds in the game.

"Stay angry, get those pigs," Vesterbacka said, only to be pelted with plush toy birds by the audience.

Angry Birds was also named the winner of the People's Voice award determined in an online vote.

Other Webby winners included teen pop star Justin Bieber, in a comedy category, Arcade Fire for "The Wilderness Downtown" video and The New York Times, which picked up awards in the how-to, travel and mobile categories.

Comedy website Funny or Die scooped up eight awards. Actor Zach Galifianakis was among thewinners for his mock talk show "Between Two Ferns."

Social news iPad application Flipboard won awards in the news and social categories and check-in application Foursquare was tapped for best use of GPS and location technology.

The advertising agency Wieden + Kennedy scored a Webby for its popular video campaign starring Isaiah Mustafa as the "Old Spice Guy" and was also named Agency of the Year.

The awards are bestowed by the New York-based International Academy of Digital Arts and Sciences.