Activision hopes to lead holiday sales with 'Call of Duty' 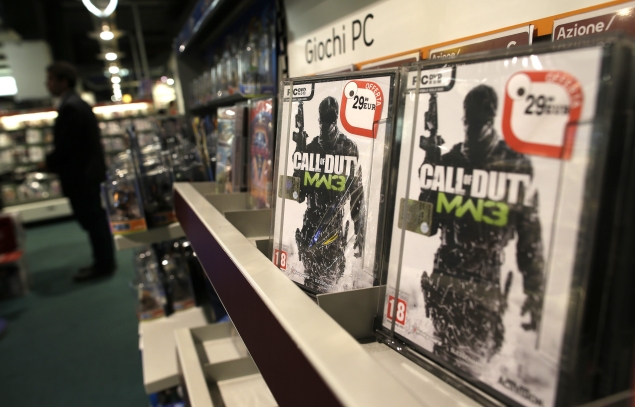 Activision Blizzard Inc raised its 2012 outlook on Wednesday on expectations of strong holiday sales of its latest title in the "Call of Duty" franchise, despite competition from Microsoft Corp's blockbuster "Halo 4."

Investors are keeping a close eye on action-shooter "Call of Duty: Black Ops II," a game that hits stores next week and advances a franchise that has broken sales records and driven Activision's fourth-quarter performance in past years.

But this year, it will have to contend with Microsoft Corp's just-launched sci-fi game, "Halo 4," for holiday-season bragging rights.

"They continue to outperform the industry," R.W Baird analyst Colin Sebastian said. "Another beat and raise for Q4, so management obviously feels confident with the holiday line-up with "Skylanders" and "Call of Duty."

The world's largest video game publisher now expects earnings per share of $1.10 in 2012, compared with 99 cents previously. It raised its revenue estimate to $4.8 billion from $4.63 billion. This beat Wall Street's view of $1.01 earnings per share and revenue of $4.68 billion.

"Microsoft did a very good job with Halo and fortunately it's only on a single platform," the Xbox, Chief Executive Bobby Kotick said in an interview.

"We raised outlook for the year as we're confident "Call Of Duty: Black Ops II" will likely be the most successful video game of the year," Kotick said.

Executives told analysts on an earnings call that "Black Ops II" pre-orders are tracking ahead of the game's previous installment, "Modern Warfare 3," but did not offer specifics.

Warcraft bounces back
Fantasy-action game "Diablo III" continues to sell well since its launch in May, executives said. Its "World of Warcraft" franchise also enjoyed a boost in sales after the September release of its latest "Mists of Pandaria" expansion pack.

Investors closely watch subscriber numbers for "World of Warcraft," Activision's most profitable business and the source of a steady stream of subscription-based revenue.

But this quarter, users were back up to 10 million after "Pandaria" sold 2.7 million units in its first week, luring gamers back.

Activision, better known for hard core shooter games, is also diversifying its revenue stream and stemming subscriber losses from its bread-and-butter games, for instance with the child-friendly "Skylanders."

It is also expanding internationally and investing in a variety of mobile games for Apple Inc's iPhone and other devices.

In a bid to expand its presence in Asia, the company released the "Mists of Pandaria" expansion pack in China in early October.

And the company announced in July that it plans to take "Call of Duty" to China as a free-to-play online game. Activision has partnered with Tencent Holdings Ltd an Internet and wireless services provider that will have an exclusive license to operate the shooter game in China.