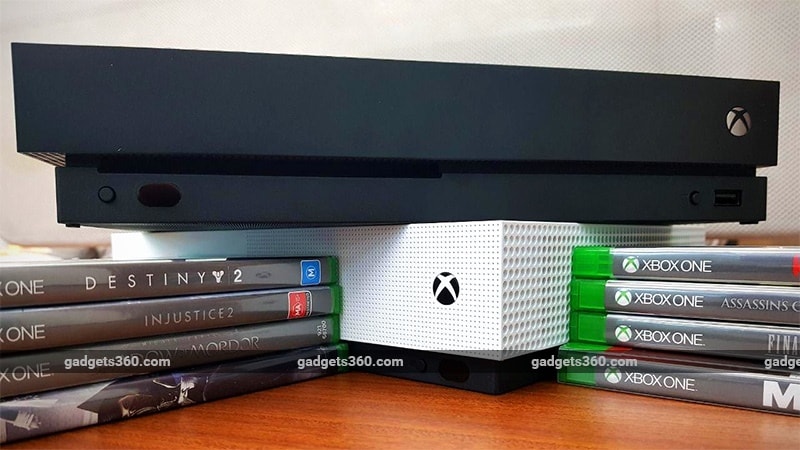 The Xbox One X — Microsoft’s answer to the PS4 Pro — finally went on sale last week in select markets. While the company is yet to confirm an Xbox One X price and release date for India, Gadgets 360 managed to spend some quality time with the console. Here’s what you need to know about the Xbox One X before you put your money down for one.

The Xbox One X comes with a 1TB hard drive. Out of the box you have 780GB that’s usable, with the rest of it dedicated to the Xbox One X operating system. Granted, it’s still a lot more space than the base Xbox One S 500GB console (that gives you all of almost 380GB to use), but you won’t be able to fit too many games on it. Halo 5 for example, clocks in at around 107GB, while Gears of War 4 occupies almost 100GB of space. Quantum Break is close to 178GB. If you’re looking to play these Xbox One exclusives you’re essentially using more than half of the available space on the Xbox One X even if you’re installing them off a disc. You can add up to three external drives to the Xbox One X thanks to its three USB ports. Between a 2TB external drive and the Xbox One X's internal drive, we were able to store 45 games, with around 200GB to spare.

With 4K and HDR support comes bigger game sizes and therefore the need for better download speeds to get your games. So, if you want to make the most of the Xbox One X you’ll need to wait a bit before you get into a game. In our experience it meant downloading a 1.8GB patch for Assassin’s Creed Origins that enabled HDR and 4K support, but this one is on the smaller side.

Things were a lot better with third-party titles — games developed for both the PS4 Pro and Xbox One X. The Final Fantasy XV Xbox One X patch size was 7.91GB, and downloaded that only much, as was Injustice 2’s 1.75GB, and Mafia 3’s 400MB.

Xbox One X games - what you need to know

While Sony labels games with technical advantages for the PS4 Pro simply by calling them ‘PS4 Pro Enhanced’ on the back of the box or on their digital store page, Microsoft’s approach is a little more detailed. Games with improvements for the Xbox One X will sport logos for HDR, 4K Ultra HD, and what it’s calling ‘Xbox One X Enhanced’. Here’s what they mean:

The somewhat long download phase was worth the wait in some, if not all, games that we tested. Mafia 3, for example, saw terrific gains in terms of a higher frame rate and enhanced visuals that trounced what we played on the Xbox One S a year ago, living up to its HDR and 4K billing. Assassin’s Creed Origins - which is rated as an HDR, 4K, and Xbox One X Enhanced title - provided a slick upgrade in terms of effects like water and sand, along with improved reflections. While not hitting the 60fps mark that’s achievable on PC, it has more than enough to make it a worthy option over the PS4 Pro and Xbox One S versions of the game.

Similarly, Rise of the Tomb Raider, and Middle Earth: Shadow of War proved that the Xbox One X allows for a degree of fidelity that’s over and above what we’ve come to expect from a console with 4K and HDR — they simply appeared more detailed with greater effects, with the ability to prioritise frame rate or graphics as needed. Not all games allow for this. Halo 5, for example while looking stellar in both 4K and 1080p, ran at a fluid 60fps all the way through. No HDR support for this game though, something Microsoft has said in the past is due to technical issues. This minor concern aside, as far as first impressions go, the Xbox One X leaves quite the mark. All while operating silently even in the most demanding of situations.

Do you need a 4K TV before buying the Xbox One X?

Trying a host of games on both a 4K HDR TV and a regular 1080p display threw up interesting results. The benefit of a sharper 4K resolution translated well even on a full-HD screen in titles like Rise of the Tomb Raider and Shadow of War. Even Forza 7 looked great regardless of the screen used, thanks to the Xbox One X super-sampling the 4K assets in these titles down to 1080p.

In this regard, HDR proves to be a bigger incentive to upgrade. Day and night races in Forza 7 look stellar, as do the lighting effects in some of Star Wars Battlefront 2’s scenes and Assassin’s Creed Origins’ take on ancient Egypt. Of course, it varies from game to game, though those that have implemented HDR seem to have done a good enough job to justify splurging for a 4K HDR TV.

We’re putting the Xbox One X through its paces, testing more games. Stay tuned to Gadgets 360 for a full review later this week.