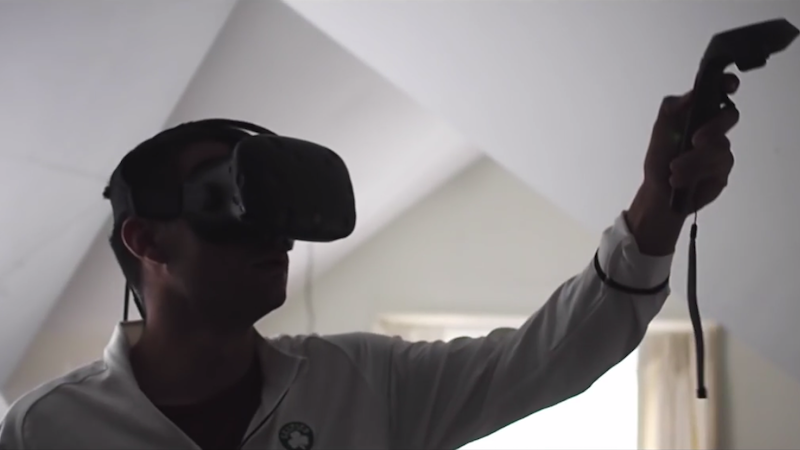 Students are developing a virtual reality game based on James Joyce's ponderous tome Ulysses as part of a class at Boston College.

The goal of Joycestick is to expose new audiences to the works of one of Ireland's most celebrated authors, as well as to give a glimpse of how virtual reality can be used to enhance literature, said Joseph Nugent, the Boston College English professor who is coordinating the project.

"This is a new way to experience the power of a novel," he said. "We're really at the edge of VR. There's no guidance for this. What we have produced has been purely out of our imagination."

Nugent and his students hope to release a version of the game on June 16 in Dublin during Bloomsday, the city's annual celebration of the author and novel. They've already showcased their progress at an academic conference in Rome last month.

Joycestick, in many ways, fills in the blanks of the novel, as many of the places key to the story have been lost to time as Dublin has evolved, said Enda Duffy, chairman of the English Department at the University of California, Santa Barbara, who has tried a prototype of the game.

"The VR version in this way completes the book," she said. "It makes it real. Ulysses is an ideal book to be turned into a VR experience, since Dublin is, you might say, the book's major character."

There have been a number of efforts to bring works of literature into the gaming world over the years, including a computer game of F. Scott Fitzgerald's The Great Gatsby that became a viral hit in 2011 as it mimicked the look and feel of a classic, 1980s-era Nintendo game.

But the Boston College project is unique for trying to incorporate virtual reality technology, says D. Fox Harrell, a digital media professor at the Massachusetts Institute of Technology.

He is impressed that the students are taking on such a complex text.

"It requires multiple entry points and modes of interpretation, so it will be fascinating to see how their VR system addresses these aspects of the work," said Harrell, who hasn't tried the game out yet.

Considered the epitome of the 1920s-era modernist literature, Ulysses traces a day in the life of an ordinary Dubliner named Leopold Bloom. The title reflects how the novel draws parallels between Bloom's day and The Odyssey, the ancient Greek epic.

Joycestick isn't meant to be a straight re-telling of Ulysses, which in some versions runs nearly 650 pages long, acknowledged Evan Otero, a Boston College junior majoring in computer science who is helping to develop the game.

Instead, the game lets users explore a handful of key environments described in the book, from a military tower where the novel opens to a cafe in Paris that is significant to the protagonist's past.

It's also not a typical video game in the sense of having tasks to complete, enemies to defeat or points to rack up, said Jan van Merkensteijn, a junior studying philosophy and medical humanities who is also involved in the project. For now, users can simply explore the virtual environments at their leisure. Touching certain objects triggers readings from the novel.

The project represents an extension of what academics call the "digital humanities," a field that merges traditional liberal arts classes with emerging technology. Nugent has had previous classes develop a smartphone application that provides walking tours of Dublin, highlighting important landmarks in Ulysses and Joyce's life.

But the native of Mullingar, Ireland, is quick to shift credit for the current project's ambition to his group of 22 students, who are studying a range of disciplines, from English to computer science, philosophy, business and biology, and have also been recruited from nearby Northeastern University and the Berklee College of Music.

"These are ambitious kids," Nugent said. "They want to prove they've done something on the cutting edge. They have the skills. They're doing the work. All I'm trying to do is direct these things."

Xiaomi Redmi 4A India Launch Likely on Monday, Will Be Exclusive to Amazon
LeEco Said to Be Looking to Sell Its Silicon Valley Site Amid Cash Crunch