PS Plus subscribers can access the free games starting January 4. 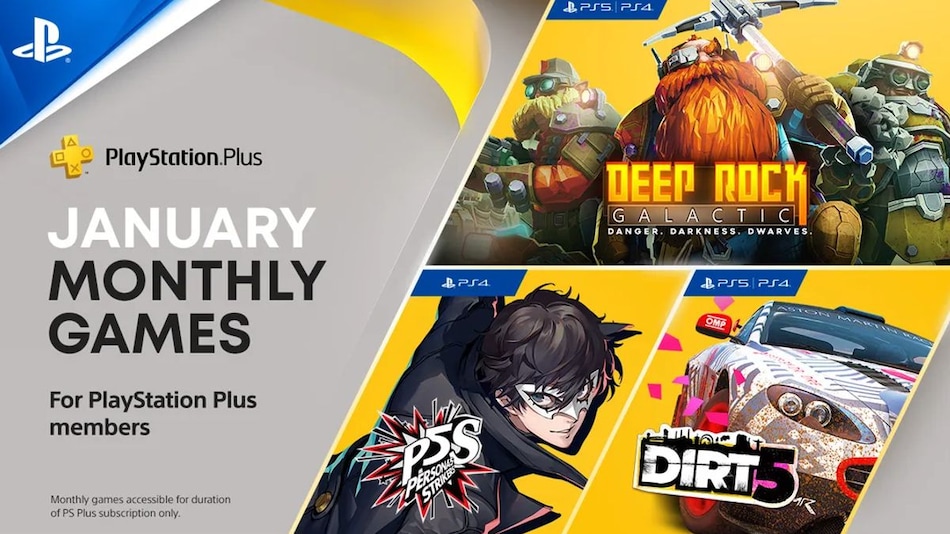 PlayStation Plus free games for January 2021 have been announced. The three new titles which will be coming to PlayStation 5 and PlayStation 4 are Persona 5 Strikers, Dirt 5, and Deep Rock Galactic. Sony says that all these games will be available starting January 4. It also said that users can add Godfall: Challenger Edition, Lego DC Super Villains, and Mortal Shell to their game library as well as three bonus PS VR games: The Persistence, The Walking Dead: Saints & Sinners – Standard Edition, and Until You Fall until January 3.

As per an announcement made by Sony, the January 2022 lineup of games will be available to add till February 1.

Available for PlayStation 4, Persona 5 Strikers is an action role-playing game (RPG) which features elements from hack-and-slash Dynasty Warriors series as well as other games from the Persona series. The game's protagonist is Joker who wields multiple Personas gained through random drops or by defeating mini bosses in dungeons. The story features the Phantom Thieves as they embark on an epic road trip across Japan where a distorted reality emerges foils their summer vacation.

Dirt 5 is available for both PlayStation 4 and PlayStation 5 users. Dirt 5 is the eighth instalment in the franchise and focuses completely on off-road racing. It comes with a Career mode where the player will take on the role of a budding racer trying to make his mark in off-road rallies. Other modes include Arcade, Time Trial, online Multiplayer, and local co-op split-screen for up to four players. The players race on over 70 routes across 10 global locations including New York's frozen East River and under Norway's Northern Lights. Dirt 5 offers 13 different categories of vehicles.

Deep Rock Galactic is also available for PlayStation 4 and PlayStation 5. It is an up-to-four-player co-op first-person shooter which features destructible environments, procedurally-generated caves, and alien monsters. The game takes place on the Hoxxes IV planet which is full of minerals, biomes, and bugs. The players have to work together as a team to dig, explore, and fight a way through a massive cave system.