PlayStation Plus subscribers will have their hands full in June with epic space dogfights and relentless martial arts action. 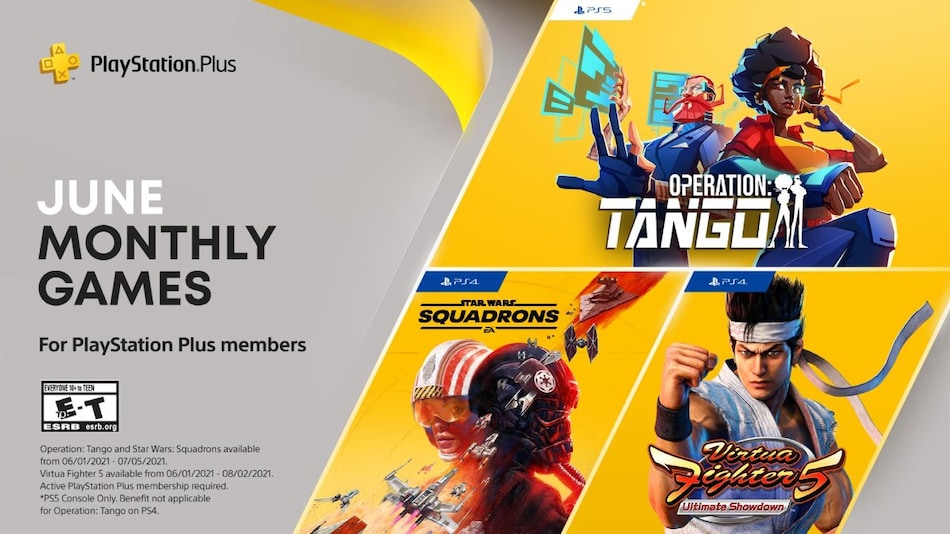 PlayStation Plus free games for June has a PS5 exclusive, as usual

PlayStation Plus users will get their hands on three free games in the month of June — Star Wars: Squadrons, Virtua Fighter 5 Ultimate Showdown, and Operation: Tango. All the three games will be available for download for PS Plus subscribers starting June 1. While Operation: Tango will be a PlayStation 5 exclusive, the other two titles will be available for PlayStation 4 users. Starting next week, you can add the free games to your library and download them later at your convenience — as long as you have an active PS Plus subscription.

Sony announced in its blog that while all the three free PS Plus games will be available starting June 1, Star Wars: Squadron and Operation: Tango will be available to be added to library until July 5. Virtua Fighter 5 Ultimate Showdown, on the other hand, will be available until August 2. Here's a quick look at all three games:

Star Wars: Squadron puts you in the cockpit of iconic starships from the franchise. You can either choose to be on the New Republic side and zoom around in an X-Wing or Y-Wing fighter. However, if you choose to be on the side of the Empire, you can take out rebel forces on your swift TIE Fighter or TIE Interceptor. The class-based first-person space combat title lets players engage in multiplayer deathmatches or team-based sessions. It does have a single player campaign, but Star Wars: Squadron is best enjoyed with friends. Its worth noting that the game is also available on Xbox Game Pass and on EA Play.

This PS5 exclusive will put PS5's DualSense controller's inbuilt mic to good use, as Operation: Tango is essentially a co-op adventure that will allow two players to team up and constantly communicate with each other (through mics) to “complete dangerous missions across the globe in a high-tech near-future world.” The game will only use the player's voices to link each other, so, communication is key.

PS Plus subscribers will still have until May 31 to scoop up the free games from May — Battlefield V, Stranded Deep, and Wreckfest. Eager customers can also check out the Days of Play sale that is now live with alluring discounts on major titles such as Spider-Man: Miles Morales (Review), Demon's Souls, Assassin's Creed Valhalla (Review), and more.

What do you think of this month's free PS Plus games? Let us know on our dedicated Gaming Community forum where you can connect with fellow gamers, seek tips and guides, or simply rant about any irksome game or feature you came across.