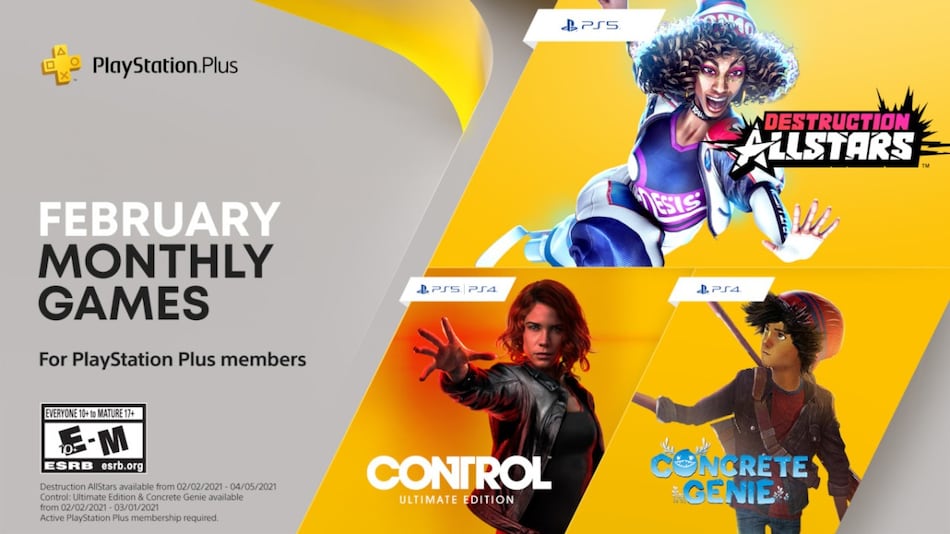 Sony announced the free games lineup on its PlayStation blog. While Control: Ultimate Edition and Concrete Genie will be available for download until March 1, Destruction AllStars will remain available until April 5.

Critically acclaimed and winner of IGN's Game of the Year in 2019, Control is developed by Max Payne and Alan Wake-series maker Remedy Entertainment. The game manages to strike a fine balance between its action-heavy gameplay and paranormal storyline, offering gamers memorable moments of pairing guns and telekinetic superpowers to take on swarming baddies. The next-gen version of Control: Ultimate Edition promises ray-tracing on 30fps graphics mode as well as a 60fps performance mode. Apart from the base game, Control: Ultimate Edition also comprises two expansions (The Foundation and AWE), along with The Expeditions end game mode, Photo Mode, and all the updates released since the title's launch.

If you aren't subscribed to PS Plus, you can purchase Control: Ultimate Edition for Rs. 3,330/ $39.99 via PlayStation Store.

This month's only PS4-exclusive title, Concrete Genie is a visually stunning action-adventure single player title. It revolves around a young boy named Ash who loves to doodle in his notebook. When a group of bullies steal the book and scatter its ripped pages across the fictional city of Denska, Ash embarks on an adventure of finding the pages. Things take a fun turn when Ash discovers a magical paint brush that can bring his creations to life. This leads to some jaw-dropping visual moments as the drab-and-dreary Denska slowly turns into a gorgeous landscape.

Originally planned to be released as a launch title for PlayStation 5 in November, the high-octane car combat game will finally see the light of day on February 2. Set in a battle royale environment, Destruction AllStars pits 16 players (aka AllStars) in an arena where they must try to take the rival's cars using their own super-powered vehicles. If an AllStar's car does get destroyed, the character can try its chances on foot, dodging enemy attacks in hopes of survival. Just like Fortnite or Overwatch, each character and their cars come with their own set of special abilities. Destruction AllStars is available as a free title for PS Plus subscribers on the PS5 until April 5. It remains to be seen whether Sony decides to release a PS4 version later.

PS Plus subscribers can still download the free games from January until February 1, before the new lineup comes in.