Life Is Strange 2 Shows Why Games Should Embrace, Not Eschew Political Themes

Life is Strange 2 isn't the only video game to address politics. Spoilers ahead. 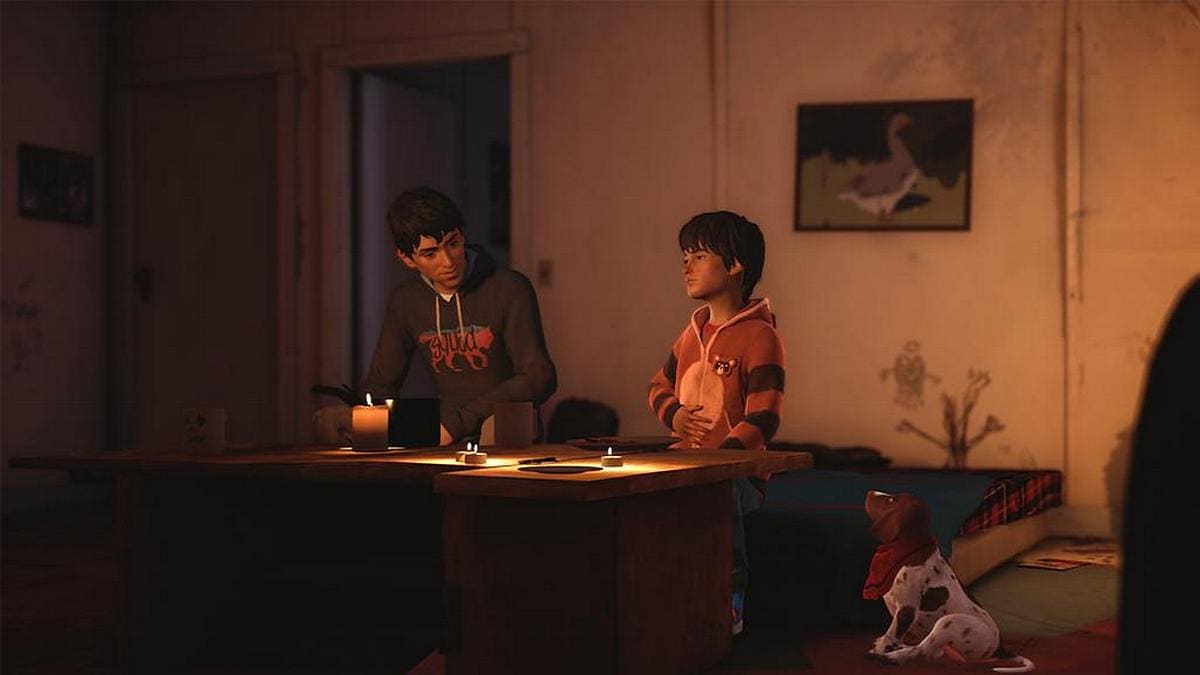 Politics and games seldom intersect in this fashion

It was a long trek from northern California to Nevada, and with no good place to stop for the night, Sean parked the car in a field and fell asleep. He didn't expect to be rudely awaked by two men shouting profanities. He was trespassing "on their land," they said. They coaxed him out the vehicle, and tried to force him to say self-degrading comments in Spanish. They wanted him to sing, providing them with some form of deranged entertainment. What would you do if you were him?

You could try to avoid a potential conflict and consent. Or your pride may lead you to refuse. Refuse, as I did, and a beating ensues. The men pummel Sean senseless, leaving him wounded in body and spirit.

As a player controlling Sean's journey, you feel responsible for him and the consequences of your decision. You could have done everything the harassers wanted and gotten away without a scratch, the alternate path in the branching story of Life is Strange 2. But as your connection deepens with Sean, you're compelled to fight for his dignity. It's through this agency that you begin to care for Sean as if he were a real, living person as you accompany him on a harrowing journey across the United States.

In Life is Strange 2, the choices you face are likely not those experienced by most who will play the game. But the game presents circumstances that for a minority of the population are real, as cultural and political tensions roil the United States and across the globe.

The above scene is an example of how politics and racial tensions are ingrained in the game's story. Sean, the playable protagonist, is a Latino American teenager who attempts to flee the country alongside his younger brother Daniel after they are accused of murdering a police officer. It's a raw narrative that is intertwined with supernatural elements, too, as you teach Daniel to cope with a magical power. Their story is both difficult and treacherous, not just because they're two young kids on the run, but because they're Latino American and living in a world that echoes Trump's America, complete with a border wall.

It's uncommon to see contemporary politics addressed so directly in video games. For the game's creators at Dontnod Entertainment, this was the point.

"I think it's true that when you're creating something, it is political in every way because we hold up some of our own beliefs," said co-director Michel Koch. "And sometimes deciding to speak about something or also deciding not to talk about a subject is a political decision in and of itself."

Politics and games seldom intersect in this fashion. As an entertainment medium, video games are often seen as escapism; a way to put aside your troubles and immerse yourself in a different world altogether. The video game community - or at least a large portion of game consumers - often struggle with the idea that video games can be political or incorporate political themes. This fear of controversy has led some studios, such as Ubisoft, to go out of their way to dispute any view of their games as "political."

Life is Strange 2 isn't the only video game to address politics. The first BioShock, for example, is all about the fall of a Utopian society and is deeply influenced by the ideologies of philosopher Ayn Rand. Others, like Far Cry 5 and Deux Ex: Mankind Divided, touch upon politics to a degree, but ultimately skew more toward the standard power fantasies commonly found in games.

But politics can enrich a story, provide a new perspective, and thanks to the immersion that video games are capable of evoking, it can drive players to feel empathy. This is the case for Life is Strange 2: This isn't a game where you're playing to win. Your goal is seeing the story through, considering the circumstances of its characters and connecting to the fictional people within it. You feel like you're the guardian of two young boys who are fumbling their way through painful circumstances for which they never asked. The political tones bring a nuance to the world and a reflection of the real lives of others in modern America.

Choosing to act, or not, have consequences with varying severity - especially in shaping who these characters are. Will you sympathize with a pregnant Mexican woman who, along with her husband, was detained at the border? Will you let Daniel unleash his wrath on two racists?

Other moments, like the two boys' approach to a border wall are left to your interpretation. While the wall is meant to keep people out, it's also keeping Sean and Daniel trapped in a country where they're fugitives. Sean and Daniel don't make many remarks about the wall itself outside of Daniel's innocuous question: "Why would they build this?"

Despite the story's setting in a culturally and politically divided United States, Paris-based Dontnod drew inspiration from the European cultural and political climate as well.

"This story is taking place in the United States but I think all the themes we talk about are present in Europe and particularly in France too," Co-director Raoul Barbet said. "We've got a lot of the issues with gun violence and a lot of discussions about borders and immigration."

Paris itself witnessed unrest when abuse and violence were aimed toward its migrants in 2018. In the rest of Europe, gun violence has become a more prominent issue in countries like Sweden despite strict gun laws.

It was important to Dontnod that there was nuance to its story and characters, so that the themes and ideas expressed in it wouldn't come across as black-and-white. Life is Strange, as a series, has struggled with stereotypical portrayals since its 2015 debut. It has leaned heavily into cliches, like rebellion and angst in teenagers, or has taken simplistic approaches to difficult themes (such as talking someone out of suicide in the first game). Life is Strange 2 doesn't escape these issues entirely, with some rural inhabitants often coming across as nothing more than racist hicks, but the story of its two main characters is gripping, and provokes the player to reflect on their circumstances by experiencing hardships alongside them.

"Because of the interactivity of the media, we really think it's interesting to make the player think about those situations," Barbet said. "We don't want to say 'this is good' or 'this is bad,' or that you should do this or that - it's more about putting the player in the shoes of Sean and letting them decide."

The politics aren't ornamental, Koch and Barbet said. Letting the player experience these stories by giving them control of a character confronted with serious and prescient issues was essential.

"Themes like immigration, gun violence, racism - I think they come with the story we wanted to tell," Barbet said.