Jurassic World Evolution, The Crew 2, and Other Games Releasing in June 2018 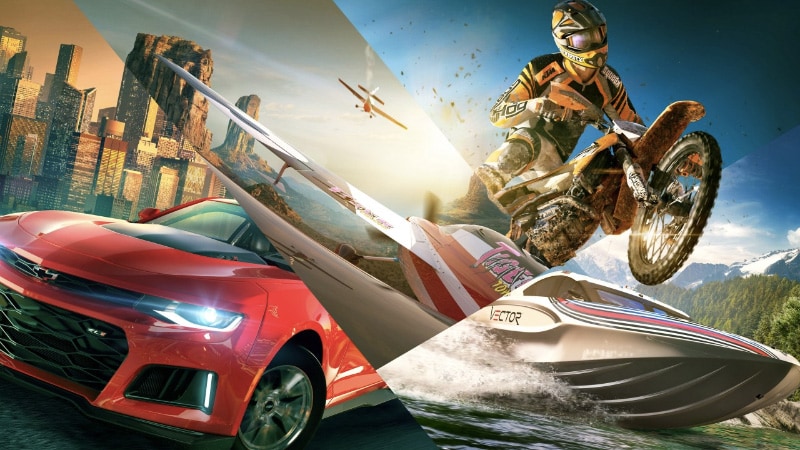 There are so many reasons to be excited about gaming in June. To begin with, there's E3, the event that will dictate our gaming wish list for the next 12 months and more. Then there are two arcade racing games out this month, both looking extremely positive as of now. We even have two games licensed on popular movies that are slated to release this month, and also a Mario game. So while you wait for the E3 announcements, which will start pouring in a couple of weeks, here's what you have to look forward to in June.

Onrush
Racing games are getting bigger, more realistic and even more social, but sometimes all we want is some old school high-speed arcade mayhem. Since Burnout and Motorstorm aren't a thing anymore, we do have their spiritual successor coming up early in June in the form of Onrush. From the house of Codemasters comes a brand new racing game that's half-parts speed and half-parts action. You have cars, buggies and bikes taking on each other with high speed takedowns on some of the most brutal terrain. What a great way to start the month.

Jurassic World Evolution
What could go wrong by opening a theme park with real dinosaurs? Well, if the four movies based on the Jurassic Park franchise has taught us anything - then it's just about everything! That said, if you're bored managing the lives of harmless sims, or creating theme parks where the most dangerous thing that can happen is projectile hurling, maybe managing a dinosaur park is just the adventure you need.

BlazBlue: Cross Tag Battle
BlazBlue has been rocking the fighting game genre for a few years now and this time its ready to up the ante with Cross Tag Battle. It collides four universes, namely BlazBlue, Persona 4 Arena, Under Night In-Birth and RWBY giving you a roster of 20 characters out of the box with 20 more available as DLC. The frantic 2D action over 3D backgrounds looks quite incredible from what we've seen so far with a welcome single-player campaign to boot, and sure enough we'll have a review ready for you by the time the game launches.

Mario Tennis Aces
It's been a while since we've had a good tennis game, and we're really hoping that Mario Tennis Aces will change that. Though it's its own beast than an actual tennis game, with various modes, power-ups and over-the-top animations and characters; it does add its own strategic elements that give the traditional racket sport a new twist. Will that make it a great game, or is a sport like tennis best left un-altered? We'll know soon enough.

Lego: The Incredibles
We all know what to expect from Lego games by now, but that doesn't make them any less fun. Sure, they're not pushing the envelope in terms of graphics or gameplay, but they are still quite fun to play as a family. Lego: The Incredibles does just that by bringing you storylines from the original The Incredibles fils as well as the upcoming sequel, giving you enough scenarios and playable characters to give you a lot to go back to.

The Crew 2
Want to take a drive across the USA for cheap? Well that's not exactly what the USP of The Crew 2 is but it does offer you that in case you need to. Taking open world to a new level by giving you the entire United States (at least a bit miniaturised version of it) as your racing arena, and letting you traverse through it by land, water or air, is a pretty ambitious undertaking. Is the second time a charm for Ubisoft's arcade racer? Our beta play through leads us to believe that it just might.

Wolfenstein 2: The New Colossus
The best single-player first person shooter of 2017 is pulling all stops and making its way to the Nintendo Switch this month, which makes us wonder about the horsepower that Nintendo's console packs. Sure it's going to be running at 30fps and may have to make a few graphical compromises, but the gameplay is promised to still be as rock-solid as it was when it first released last year. There's even motion control support to make dual weapon-wielding more fun. Will this open the floodgates of triple-A shooters on the Switch? Only if it manages to repeat the magic of Doom.

Vampyr
Vampyr has a pretty interesting plot line where you play a doctor who's been transformed into a vampire and placed bang in the middle of the 1918 Spanish flu pandemic. What follows is the hard decision of praying on the victims, while curing them of the disease at the same time. The premise and gameplay are both interesting from what we've seen so far, and we're looking forward to how it finally turns out.

That's not all. If you have a PlayStation Plus subscription, or a Xbox Live Gold subscription, there are some more complementary games heading your way.

PlayStation Plus Games for June 2018

Over to you - what are you looking forward to playing this month? Tell us in the comments below.