Gran Turismo 7 price starts at Rs. 3,999 for the Standard Edition. 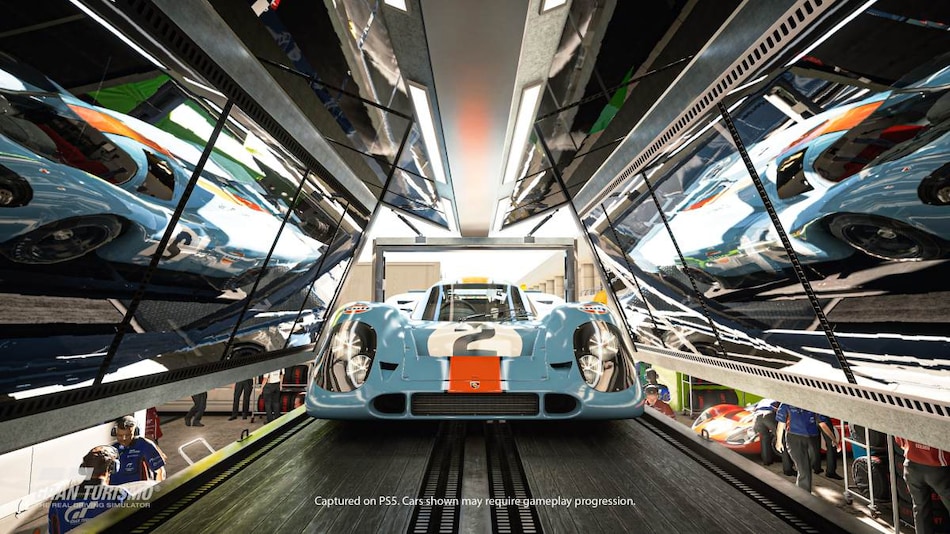 Gran Turismo 7 is the eighth title in Polyphony Digital's popular racing simulator. It succeeds Gran Turismo Sport that was released in 2017 and will feature more than 400 cars that include run-of-the-mill production cars in addition to rare and exotic cars. Exclusive to PlayStation consoles, as the series has been ever since its inception back in 1997, Gran Turismo 7 will let players burn virtual gasoline in 34 different locations that shuffle between 97 layouts. You will navigate all of this through a car-themed resort that serves as the Gran Turismo 7 main menu. Part of said resort is The Cafe, where players will get to learn about the history of the cars they unlock and their iconic manufacturers.

Last week, Amazon US — among other retailers — mistakenly shipped the physical copies of Gran Turismo 7 to players who pre-ordered the game. This is also not the first time a Gran Turismo game has reached players before it was launched. As per the report, Gran Turismo 6 reached as early as a week before its launch to players in the Middle East back in 2013.

Since the original Gran Turismo title hit the shelves in 1997, the series has sold more than 80 million copies worldwide.

With that, here is everything you need to know about the latest Gran Turismo title, available later this week on PlayStation 4 and PlayStation 5.

Polyphony Digital's latest racing simulator will be released on March 4. As per a listing on PlayStation Store, Gran Turismo 7 will unlock for players in India at 12am IST (midnight). But according to the listing on the PlayStation Store in the US, all players across all regions will get access to the game at the same time.

There are two editions of Gran Turismo 7 that players can purchase, though one of them has two variants.

The Standard Edition is limited to only the PS4. However, there is another “Standard Edition” that is compatible with both PS4 and PS5. This weird concoction exists due to Sony's decision to charge extra for the PS5 version of the game. Both Standard Editions of Gran Turismo 7 include only the base game.

Gran Turismo 7's Deluxe Edition celebrates the 25th anniversary of the Gran Turismo franchise. As part of the Deluxe Edition, players will get access to the base game in addition to 1.5 million CR (in-game credit), a special Toyota GR Yaris, 30 PlayStation Network (PSN) avatars, along with the official soundtrack.

While Sony introduced the Rs. 4,999 pricing with its exclusives at the launch of the PS5, it's retaining a dual-tier strategy for games being made for both PlayStation generations. Last month's Horizon Forbidden West was also part of this scheme, but fan backlash led Sony to reverse its decision — but only on one title. Starting with Gran Turismo 7, PS5 versions will stay at Rs. 4,999.

You can buy both Standard and Deluxe Editions via retail channels too, for the same price. Pre-orders have been live for a while now.

The new Gran Turismo 7 is going to get an extensive car list, as a report by GTPlanet suggest that the game may include more than 420 cars. It is said to include brands like Abarth, BMW, Bugatti, Chevrolet, Ferrari, Honda, Lamborghini, Lexus, McLaren, Mercedes-Benz, among many others. Gran Turismo 7 will include regular family cars to exotic, rare cars.

Polyphony Digital showcased a bunch of gameplay for Gran Turismo 7 through PlayStation's State of Play event earlier in February. By the looks of it, the game appears to be the best Gran Turismo title that has been released on Sony's consoles. During the event, Kazunori Yamauchi — the creator of the Gran Turismo franchise — mentioned that Gran Turismo 7 will get over 400 cars from more than 60 manufacturers. More vehicles are slated to be added to the game through future updates.

The new car-themed resort in Gran Turismo 7 acts as the main menu for the game. It also doubles up as a world map as well as offers access to the garage for players to store and browse their vehicles. Players can also customise their vehicles through the tuning shop, GT Auto, and livery editor menus.

One of the main things that Yamauchi touched upon during the State of Play event was The Cafe. Players are given a “menu book” with predetermined vehicles and after acquiring any car, the game will show an audio-visual history on the vehicle.

Players will get to drive in 34 different locations with 97 layouts. Series-classic tracks like Trial Mountain, Deep Forest, and High Speed Ring are making a comeback with Gran Turismo 7.

The new Gran Turismo game also gets the Licence Centre, Missions, multiplayer modes with couch co-op, and a photography mode via Scapes and Race photo. The former allows players to click images in around 2,500 locales, while the latter lets players take photos on race tracks.

Another new feature that Gran Turismo 7 will get are Music Rally events. Here, players will have to complete the event by driving around the track till the song ends, and players are rewarded based on how much distance they cover before the song ends.

Gran Turismo 7 utilises ray tracing on the PS5. It also supports 3D Audio on supported devices. The game will also fully utilise the PS5's DualSense controller for a better immersion.