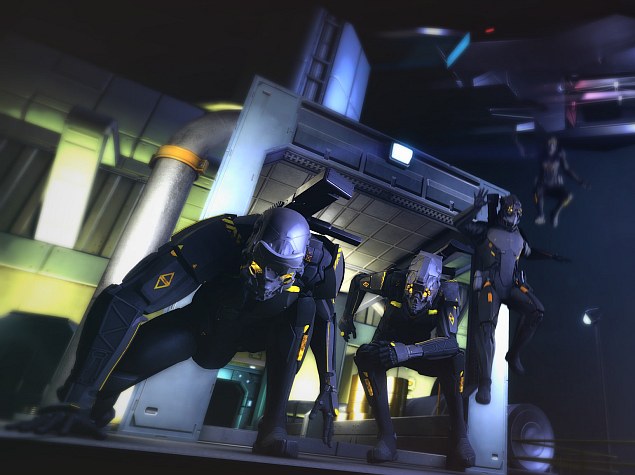 Besides witnessing a range of announcements made about Microsoft and Sony's game consoles and their associated services, several game titles were either announced or showcased by publishers at the Gamescom 2014 (August 13 to 17) event in Cologne, Germany.

Games like Until Dawn, Alienation, The Tomorrow Children, Hellblade, The Vanishing of Ethan Carter, Hollowpoint and WiLD were some of the most-anticipatedtitles announced at the event. While some of the video games are console exclusive, others support both consoles and PCs.

Until Dawn, an anticipated horror video game first briefly introduced in 2012 and originally due as a Sony PlayStation 3 exclusive, has finally been made official for the PS4 at Gamescom 2014 - with no exact release date. The title has been created by Supermassive Games, the studio responsible for PS Move games like Walking With Dinosaurs, Start the Party, and Tumble.

Alienation, a sci-fi game title under development by Sony and Housemarque, a Sony-partner studio, was also announced at the event. Players would have to kill alien swarms in an 'action-oriented arcade experience'. The game's four-player co-op, and access to both 'hybrid and alien' weaponry is being touted by the makers.

Besides Alienation, another PS4 exclusive title dubbed The Tomorrow Children was introduced at Gamescom. The Tomorrow Children is set in a post-apocalyptic world still recovering from a 1960s Soviet attempt to mind meld the global consciousness. 90 years later, players are tasking with rebuilding the world from the Void, whilst defeating the Izverg monsters. The game has been developed by Q-Games, which is popular for the PixelJunk series on PS3. No date of release is known yet.

Hellblade, a new action video game by Ninja Theory, was also announced at Gamescom 2014, and will be reaching the Sony PlayStation 4 console - however, it will not be an exclusive. The title (seen below) is said to be a new IP and is not a sequel to any of the previously created title by Ninja Theory - which has made Heavenly Sword, Enslaved, and DmC.

The Astronauts, a team of game developers that also founded People Can Fly, announced The Vanishing of Ethan Carter for the PS4. The title is a story-driven mystery game that is based on 20th century's macabre tales. The users will play the game as a detective with a first-person perspective.

Debuting on PS4, Hollowpoint by Ruffian Games (the makers of Crackdown 2), is a four player co-op combat game due for the PC and PS4 in 2014. Players are in charge of secretive Organisations of corporate mercenaries, taking on missions for credits and XP to buy assets and abilities to ultimately become the 'most feared and respected Organization there is.' The developers say the game blends 2D platform shooter and 3D shooter gameplay.

Another PS4 exclusive title, the release date of which is yet to be announced, is WiLD. The title (seen below) is said to be a massive open world the 'size of Europe' with dynamic weather and seasons. Players can take the role of various animals, from humans to sheep to wolves. The title is made by Wild Sheep Studio, which is helmed by Michael Ancel, best known as the creator of the Rayman series.

The Gamescom 2014 event also saw Hideo Kojima, the creator of the Metal Gear series, and Guillermo del Toro, a popular film-maker, announcing a team-up for a new instalment of the classic Konami horror franchise, titled Silent Hills. The title is also known to feature the Walking Dead's Norman Reedus. A teaser trailer of the game was revealed, along with a cryptic 'playable teaser' P.T demo that was released a day earlier on the PlayStation Store, with players able to get a look and feel of the environment.

Notably, EA's BioWare, the creators of the Mass Effect and Dragon Age franchises, are making Shadow Realms - an online action RPG due in 2014 for the PC. The game is played with a team of four players or 'Heroes' against the demons of the 'Shadow Legions', which are controlled by the fifth player. Interested players can sign-up for the alpha testing phases.

The Guild Wars 2 is a popular MOBA (multiplayer online battle arena) game, and developers ArenaNet announced at Gamescom that the first ever global competition for the game - the World Tournament Series - will kick off in Beijing in late autumn with a $150,000 prize pool. ArenaNet also mentioned that it would release a free September 2014 Feature Pack to Guild Wars 2 players.

Also announced at Gamescom was that the multiplayer beta of Fable Legends, an upcoming RPG title developed by Lionhead Studios, will reach Microsoft Xbox One on October 16. The players in the four player co-op title can also take the role of the villains, and a new trailer was also showcased at the event.

Battlefield Hardline, one of the most anticipated games by EA, also shared the limelight at the Gamescom 2014. The title's multiplayer modes, Hotwire and Rescue, were announced and will be available to play at Gamescom.

While the Hotwire multiplayer mode includes high speed chases of criminals by cops, the Rescue mode lets five players team up to rescue hostages held by an another team of five players who play as criminals. The game however, is set to release early next year.

Gamescom 2014 also saw Microsoft announce that Rise of the Tomb Raider, which was first announced back at E3 2014 months ago for a holiday 2015 launch, will be an Xbox One exclusive. Developers Crystal Dynamics placated PC and PS4 gamers saying Lara Croft and the Temple of Osiris will be available for those platforms.

At Gamescom, several developers and publishers revealed new trailers of their upcoming games, showing off gameplay. Some of the games showcased were Assassin's Creed: Unity, Bloodborne, Destiny, Driveclub, inFamous: First Light, and The Order: 1886.