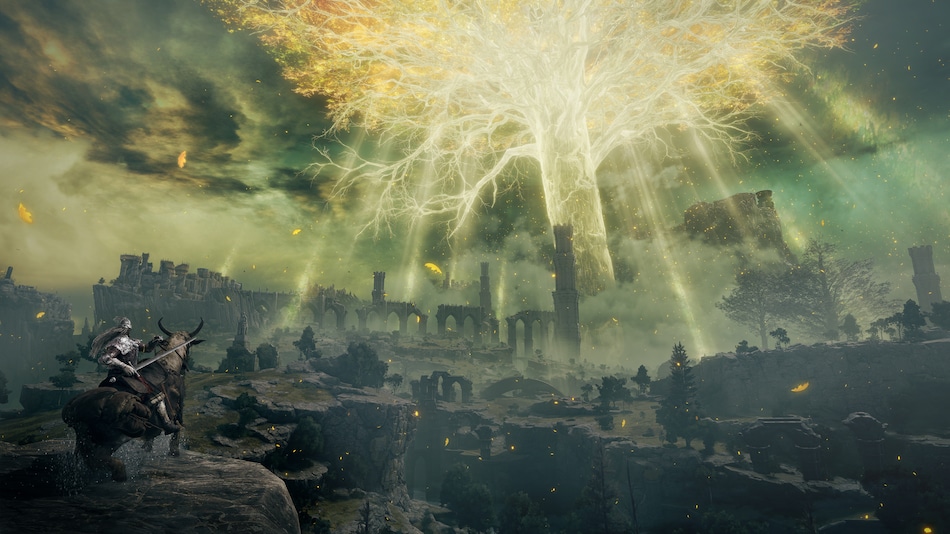 Elden Ring has been created in collaboration with Game of Thrones author George R.R. Martin

Elden Ring — the upcoming action-role playing title — is set to launch on Friday on PC and consoles, bringing the latest Souls-like experience from developer FromSoftware. Considered one of the most awaited titles of 2022, Elden Ring has been created in collaboration with Game of Thrones author George R.R. Martin who has written the mythos of the upcoming title. And naturally in addition, gamers can expect to see familiar elements from the Souls series and Sekiro: Shadows Die Twice.

Starting Friday, gamers will be able to traverse the Lands Between as part of their quest to recover the shards of the Elden Ring, also known as Great Runes. Players will have to seek out the missing Runes to restore the ring and become the Elden Lord. Elden Ring is expected to feature elements from the Souls series —such as resting and fast travel using Sites of Lost Grace (or bonfires)— while adding a few notable new improvements.

One of the biggest changes to the Souls-like Elden Ring title from developer FromSoftware is the new open world design, allowing gamers to explore six main regions. While the preceding Dark Souls titles also allowed gamers to discover move around freely, it looks like Elden Ring was designed to offer that on a larger scale. The game also features the ability to find and locate places of interest using markers.

From Elden Ring to Grid Legends, Games to Play in February

Meanwhile, Elden Ring will also allow gamers to engage in combat and jump while riding a horse, which can come in handy in certain situations. Summoning will allow gamers to rope in friendly characters to help out in a tough spot.

Back in 2019, Elden Ring game director Hidetaka Miyazaki had explained how Martin of Game of Thrones fame contributed to the game. Martin and Miyazaki had several free and creative conversations where the director told him about the game, and Martin used these conversations to create the mythos of the game — and the Lands Between that the game is set in.

Martin revealed in 2021 that his writing for Elden Ring was completed while the title was in early development stages. “I worked up you know a fairly detailed background for them, and then they took it from there so really it's been several years since I've last seen them,” Martin said, adding that he would be “as excited as everyone else to see it.”

With that, here's everything you need to know about Elden Ring before it arrives on PC, PlayStation 5, PlayStation 4, Xbox Series S/X, and Xbox One consoles later this week.

Elden Ring is scheduled to release on Friday, February 25 on PC, PS5, PS4, Xbox Series S/X, and Xbox One.

Console gamers in India will be able to play Elden Ring a little earlier than PC gamers, as the game unlocks for PlayStation and Xbox globally at midnight local time on February 25, the developer recently revealed.

Meanwhile, PC gamers in India will be able to play Elden Ring starting 4:30am IST on February 25. The game is available to preload in India on PC, PS4, PS5, Xbox One, and Xbox Series S/X.

From Elden Ring to Starfield, 45 Most Anticipated Games of 2022

Gamers can also pick up the Deluxe Edition which includes the full game, along with a digital artbook and the original soundtrack. Gamers who pre-order the game on Steam will get bonus content including an Adventure guide and a Bonus Gesture that can be used in the game — this can also be unlocked over the course of the game.

For those who want to pick up Elden Ring on disc in India, Elden Ring is available on Amazon, Game Loot, Games the Shop, and Prepaid Gamer Card.

Developer FromSoftware announced the Elden Ring PC system requirements back in February. They are as follows —

Gamers who have played the preceding Souls titles or Bloodborne and Sekiro: Shadows Die Twice will find the gameplay in Elden Games quite similar to the aforementioned titles, including casting spells, rolling, and more. However, the game also introduces new gameplay features such as combat while riding a horse.

Those who have played the older Souls games will also remember the popular summoning feature that allows gamers to call upon allies to help them in battle. In Elden Ring, gamers will also be able to summon creatures as spirits, which could come in handy for specific situations.

Over the course of the game, players will also have to deal with a natural weather and time-of-day progression, with 24-hour day and night cycles and rain, storms and snow. The game also features several powerful monsters, including a fire-breathing dragon.

In addition to combat, gamers will also be able to craft new items on the go. FromSoftware didn't shy away from showing users a part of the game's story, unlike older Souls titles. However, players don't need to worry about it giving the plot away, most of the game's plot is still shrouded in mystery.

Elden Ring players can look forward to multiplayer support in the form of co-op gameplay. This means that players will be able to summon their friends, to help them in battle. This is a well-known functionality in the Souls series, where gamers appear as ghosts when they have been summoned.

According to Elden Ring producer Yasuhiro Kitao, Elden Ring has a main campaign that runs for around 30 hours. Kitao revealed that the 30-hour target was actually set during development. “The game as a whole is quite massive, and contains many dozens more hours' worth of gameplay, but if we are talking about the main route only, it shouldn't take much longer than 30 hours,” Kitao said.

Back in June 2021, developer FromSoftware revealed the first gameplay trailer for Elden Ring, while revealing the January release date for the game, which was later pushed to February 25. The three-minute trailer showed a lot of classic Souls features, including the ability to rest at bonfires, fast travel, and the stab enemies from behind (Backstab) and the horseback combat, and a stealth mode to outflank enemies and run away.

In a recent gameplay trailer, FromSoftware gives gamers a good look at the world of Elden Ring — including the Tarnished, exiled heroes who have lost the Ring's grace. Gamers are given a good look at the enemies and monsters they will face off with in the game, and shows the vast landscapes they can explore in the game. Players can also take a look at some of classes they can select, including the new Prophet and Wretch classes. Meanwhile, the launch trailer for the upcoming Elden Ring title was just released and shows off the massive open world design, as well as some combat in the game, which features elements of the preceding Dark Souls games. The trailer runs for nearly three minutes and shows several battles with monsters and creatures including massive dragons and crustacean.

According to multiple reports, the first reviews for Elden Ring will be available starting February 23 at 8:30pm IST / 7am PT / 3pm GMT. Yep, that's when the review embargo FromSoftware has set ends.