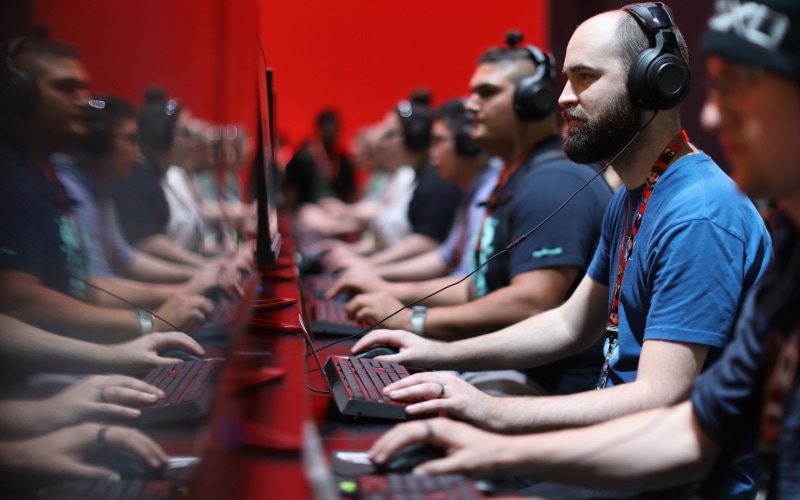 A hot trend of video game play streamed as spectator sport and "YouTubers" becoming famous for skills or pithy commentary pervaded the annual gathering, from unveilings of titles to major 'e-Sports' matches staged for the first time on the show floor.

"There is a reality now that the influencers of the gaming industry are no longer the games, but the YouTube creators," YouTube head of gaming Ryan Wyatt told AFP.

"It is smart to bring creators into the fold so the feedback is constructive, and not scathing reviews."

Players who have risen to stardom by streaming play online took part in theatrical press conferences held by game and console makers in the days ahead of the formal opening of E3.

Unveilings of eagerly-awaited titles and new franchises were streamed live on platforms including Facebook, Twitch, and YouTube - drawing hundreds of thousands of viewers.

YouTube billed itself as the biggest gaming platform, and said that broadcasters from E3 racked up record-sized audiences.

"Before publishers caught on to the power of the creator, I think creators felt alienated," Wyatt said, referring to players who stream game action and comment online.

"All of that has changed now. They are integrated into the show and their feedback goes into the design, marketing and promotion of games.

Outshining real-world sports
Video game competition as spectator sport is driving the industry in many ways, according to Craig Levine, chief of leading e-Sports company ESL.

Developers are building games with features to be attractive online spectator events, offerings at E3 showed.

"There are more people watching these games than playing them; it has more than crept into the design cycle," Levine told AFP.

This week, for the first time at E3, there was an e-Sports zone powered by ESL where video game battles were fought and streamed online.

"ESports has one of the fastest growing audiences in not just video games but all of entertainment," said Rich Taylor, senior vice president of communications at the Electronic Software Association behind E3.

In the coming three years, the global audience for eSports was predicted to grow to a half-billion viewers, eclipsing the numbers watching traditional real-world sports, according to Levine.

And, while the focus at E3 was on games for consoles or Windows-powered computers, mobile game play is consistently in top ranks when it comes to viewing, according to YouTube.

More women gamers
The gaming community is huge at Facebook, which returned to E3 this year with an area for live-streamed chats with developers and personalities, and where visitors could share thoughts about the show at the social network and capture memories with 3D or augment reality technology that put them into game scenes.

During the past month, 43 million people have made some 115 million posts, 'likes,' and comments related to E3 and major titles.

More than a third of that sharing came from women, who are a growing part of the gaming community, according to Facebook.

"We've seen this community of gamers continue to grow and evolve each year - with women now taking a growing share of the conversation around E3," said Facebook head of global console and online gaming Franco DeCesare.

Facebook worked with ESL, video game giant Activision and others at E3 to create content for the social network.

"The fact that the player really is at the center of everything is really powerful," Olebe told AFP.

"As the player takes a larger role in what's happening inside our industry, Facebook is perfectly positioned to facilitate that process."

Xiaomi Redmi Note 4 Up for Grabs via Flipkart and Mi.com