Alongside Battlefield 2042, Just Dance 2022, Star Wars: Knights of the Old Republic, and more. 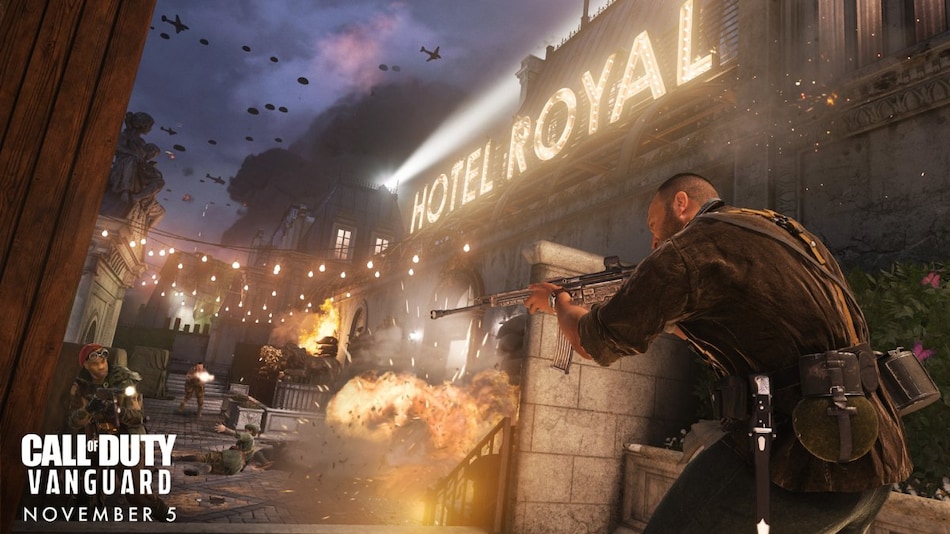 Call of Duty is back with yet another WWII-era campaign

Call of Duty: Vanguard, Jurassic World Evolution 2, Forza Horizon 5, and more games are set to break cover in November. Fans of first-person shooters can start planning their loadouts as Battlefield 2042 and Call of Duty: Vanguard will be hitting both current-gen and next-gen consoles alongside PC. While CoD is luring co-op players with a new Zombies campaign, Battlefield promises massive multiplayer battles with up to 128 players. Racing fans will get to fire up the much-awaited Forza Horizon 5 — provided they have a PC or an Xbox.

When: November 2
Where: PC

This could be an interesting title to pick up. Developed by Warsaw-based Varsav Game Studios, Giants Uprising brings together a Tolkien-esque story with gameplay that may remind you of 2005's The Incredible Hulk: Ultimate Destruction. You get to play as Rogbar and Kiełbasa, two giants who must exact revenge upon the betraying human race and reclaim the lost glory of their race. In terms of gameplay, the developers say they want you to “feel pure pleasure from extremal destruction.” You get to flatten villages, crush puny human legions, and use environmental elements to wreak havoc.

In the iconic ‘80s hit “Let's Dance,” David Bowie crooned, “Put on your red shoes and dance the blues.” Ubisoft appears to have been taking the legend's words a bit too seriously and has already brought out a dozen games in its popular Just Dance series. The 13th game in the lineup doesn't appear to mess around with the tried-and-tested formula and will stick to the classic gameplay style where players will have to mimic on-screen choreography moves. As usual, players can use motion controllers or the game's mobile app. Just Dance 2022 will feature hip-swinging tracks such as Beyoncé's “Run the World (Girls),” and Dua Lipa's “Levitating.”

Yes, Call of Duty is back again. And yes, it's yet another World War II special. After Call of Duty: WWII simply rehashed the storyline of the Golden Globe-winning miniseries Band of Brothers, Call of Duty: Vanguard boasts that this time, players will get to “witness the origin of Special Forces” in the main campaign, which will span across the European, Pacific, as well as North African theatres of the war. For CoD fans, however, multiplayer's where all the fun is at, as the game promises new maps, game modes, and of course, the return of a brand-new Zombies co-op campaign.

Call of Duty Vanguard Multiplayer Beta Hands-On: A Step Back in Time

When: November 5
Where: PC, Xbox One, Xbox Series S/X

Probably the only other Xbox exclusive PlayStation fans envy apart from Halo, Forza Horizon 5 is set to release in the first week of November. This time around, developer Playground Games will take gamers to the beautifully recreated world of Mexico. From poster-worthy sports cars such as Mercedes-AMG One to all-terrain dominators such as the latest Ford Bronco models, you'll get to drive a wide variety of cars across a vast open world chockablock with both single-player and multiplayer activities.

What if Roller Coaster Tycoon met Jurassic Park? The first Jurassic World Evolution from Frontier Developments offered a fun, real-time strategy gameplay where you get to create and manage a prehistoric theme park where dinosaurs are your main attraction. From planting the right shrubs and trees for your harmless herbivores to making sure that the terrifying T-Rex doesn't escape its enclosure (again), Jurassic World Evolution 2 and its more complex artificial intelligence is sure to keep you busy for hours. Oh, Jeff Goldblum and Bryce Dallas Howard will be returning to voice their on-screen characters of Ian Malcolm and Claire Dearing, respectively. If you still aren't hyped, check out Goldblum and his exceptional quips in this gameplay video below:

When: November 11
Where: Nintendo Switch

Set a long time ago in a galaxy far, far away (in fact, 4,000 years before the events of Star Wars: A New Hope), the story of Knights of the Old Republic chronicles a bitter war between the Sith and the Jedi. If you've already played the original BioWare game from 2003, and if you own a Nintendo Switch, you shouldn't miss out on this platform-exclusive port. The gameplay is still fun, and the story is still one of the best Star Wars lore out there. While a PS5 remake is on its way and an entirely new KOTOR game reportedly in the works, the Switch version could help while away the time in between.

Step into the Victorian boots of a 21-year-old Sherlock Holmes, as he explores the Mediterranean island of Cordona to unravel a sinister conspiracy. Judging by the gameplay trailer, the action-adventure title will involve lots of on-foot exploration, close quarter combat, Batman: Arkham Asylum-style crime scene investigations, and Hitman-style disguise options. If you are a fan of the sleuth, Sherlock Holmes Chapter One might make for an interesting pick.

Get ready to take no-scope 360 shots yet again as Battlefield is back with its latest instalment. This time around, there won't be any single player campaigns and DICE will only focus on massive multiplayer modes. Battlefield 2042 will support 128 players on PC and next-gen consoles, with 64 players on current-gen ones. As a first for the franchise, Battlefield 2042 will feature cross-platform play for PC, PS5 and Xbox Series S/X. This might give Battlefield 2042 an edge over Call of Duty: Vanguard upon release.

When: November 19
Where: Nintendo Switch

Remakes of the eponymous 2006 Nintendo DS games, Pokemon Brilliant Diamond and Pokémon Shining Pearl are set to bring the classic gameplay to Switch users with visibly improved graphics. As a trainer, you will get to explore the fictional island of Sinnoh. As is the standard with all other Pokemon games, you will spend most of your time capturing, training, and fighting exquisite Pokemons. This title is largely suggested for dedicated fans of the franchise.

Not many Cricket games were able to recreate the sheer brilliance of Codemasters' 1998 release, Brian Lara Cricket. But then again, there haven't been too many Cricket games in the first place. Cricket 22, developed by Melbourne-based developer Big Ant Studios may just knock one over the boundary with its revamped controls and impressive graphics. This will also mark the first-ever Cricket game on next-gen consoles. Just like FIFA, you will get a story-driven career mode. It will be interesting to hear the all-women commentary team when women's teams play each other.