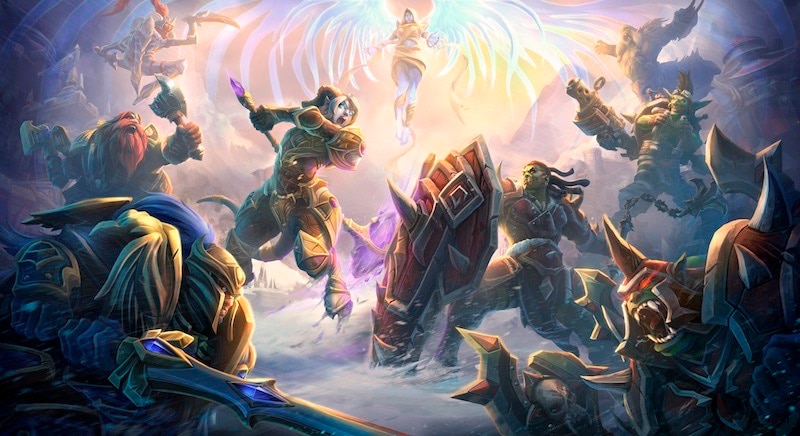 Heroes of the Storm is Blizzard's answer to League of Legends and Dota 2. While the latter duo have their own unique lore and characters, Heroes of the Storm borrows liberally from other Blizzard properties like Overwatch, Starcraft, and Diablo with heroes and maps (or battlegrounds as Blizzard calls them) added regularly. The game will receive a substantial update that finally adds a location from the Warcraft series called Alterac Pass.

Keeping with the Warcraft theme, Yrel a hero from the World of Warcraft Warlords of Draenor expansion will be added too along with a brand new event called Echoes of Alterac that rewards players with new cosmetic items. Gadgets 360 spoke to the development team behind Heroes of the Storm ahead of its Warcraft-inspired update to find out what's next for the MOBA.

Thematically, it’s easy to think of Heroes of the Storm as the MOBA-equivalent to Nintendo's Super Smash Bros series of fighting games which feature Nintendo's characters as they square off in battle, with little in the way of its own unique lore. Expect that to change with the developers peeling back the origins of the Nexus, the transdimensional cosmic storm that serves as the reason for several Blizzard universes colliding. While the company uses animated shorts to reveal sections of Overwatch story, Heroes of the Storm uses in-game comics as the medium to take its fiction forward.

"This year we kicked off this exploration of the lore of the Nexus and the first thing with that was our Rise of the Raven Lord comic that came out alongside Deckard Cain [a hero added to the game from the Diablo series] a little while ago,” says Production Director Kaeo Milker. "We will have our next comic in the series out alongside Echoes of Alterac and there is a part of it that will talk about the Raven Lord's interest and involvement with Alterac Pass and the battle that's ensuing there".

Overwatch Lead Engineer on the Fear of Teleportation, Battle Royale Mode, and More

And it’s not going to be restricted to the Echoes of Alterac event either with lore reveals slated for the year.

“We'll continue to weave that in as we go across the rest of the year there will be events like Nexomania that strayed away for a bit and had some good old wrestling fun but a lot of the big beats that we have across the rest of the year will tie back into an overarching story," he adds. "We will continue to have ways to tie back in the things going on with our content to this overarching Nexus storyline as well.”

With a greater emphasis on telling Heroes of the Storm’s own tale, would we see the team take a different approach to the addition of new heroes and characters to the game? Could it consider those outside of Blizzard’s orbit?

"I would never say never there, but we're focussing on all the Blizzard content right now,” says Milker, though others suggest we could see more, specifically in terms of Warcraft.

"There's some iconic bosses and other characters from the Warcraft universe that we want to explore," Matthew Cooper, Lead Content Designer, chips in. "Deathwing would be a challenge for us but it would be super epic so there's definitely other Warcraft characters we'd be interested in doing as well."

Considering that Blizzard’s digital distribution service Battle.net is now home to titles such as Destiny 2 and the upcoming Call of Duty: Black Ops 4 that are published by parent company Activision, could these feature in Heroes of the Storm?

"That makes sense," admits Milker. "We play those games and we're fans of them. Having that relationship is definitely helpful to that thing but for now we're really focussed on this amazing Blizzard content.” He then adds that keeping the game’s core audience appeased is of importance.

“The list of all the things we want to do and our players want us to do is long," he continues. "We'd get a lot of flak from our players and ourselves if we went outside of that before we touched on a lot of key areas that are absent from the game.”

Beyond Warcraft, Starcraft, Diablo, Hearthstone, and Overwatch, there are some lesser known Blizzard titles such as Lost Vikings and Rock and Roll Racing that form a part of its Blizzard Classics label. While the titular Lost Vikings are playable in Heroes of the Storm, the team is mulling over options to bring more characters from the Classics line up over. If not as playable heroes then maybe as announcers or skins, we’re told.

The conversation shifts to the quests — challenges unique to the Echoes of Alterac event. Completing these nets you goodies such as skins, sprays, and mounts. Obtaining some of these rewards seemed a little too time intensive for our liking. Milker explained the design philosophy behind the system.

"Our goal is to give people this fun experience of jumping in and playing the game and hopefully they play it in a pretty normal way," he says. "They shouldn't have to go in some crazy bizarre behaviour that changes their enjoyment of the game, the idea is that they experience the event, get cool rewards so you'll see us continuing all this.”

“I’ve been excited about the branching quest line because it gives players this distinct choice with unique rewards as well so you can expect us to explore that more and see what kind of fun things we can do with it,” he continues.

That said, the focus is ensuring choice doesn’t get in the way of Heroes of the Storm’s overarching goal of players working together as a team. It’s the reason why the game doesn’t consider a system similar to Fortnite’s Battle Pass for its events and challenges, which could make quests easier for newcomers as well as unlock additional revenue for the company.

"No plans for that right now but we're definitely watching all things going on in various games around the industry and we play all these games," says Milker. "We'll keep looking for things that are a good match our game and our players but yeah, nothing like that on the table right now."

Lead Hero Designer Matt Villers elaborated further.   "One thing we have to watch out for given the team-based nature of our game is we want to make sure that any objectives we give you aren't clashing with the objective of working with your team and winning the game," he explains. "Sometimes people ask 'why don't have a quest that lets you poke others with Stitches [another hero in the game]?’ The reason we don't do that is we don't want someone to favour completing that quest over actually doing what their team needs to win the game so that's something we have to think about when we're designing any objectives.”

Finally, we noticed that one of the new skins coming with this update is a goblin skin in the mould of popular Overwatch character Junkrat for those choosing the Horde faction path of the Echoes of Alterac quest. We had to ask, is Junkrat the sort who'd play as the Horde in World of Warcraft?

"In the Nexus he is, that's for sure," says Milker. ”He's definitely a goblin in Warcraft."