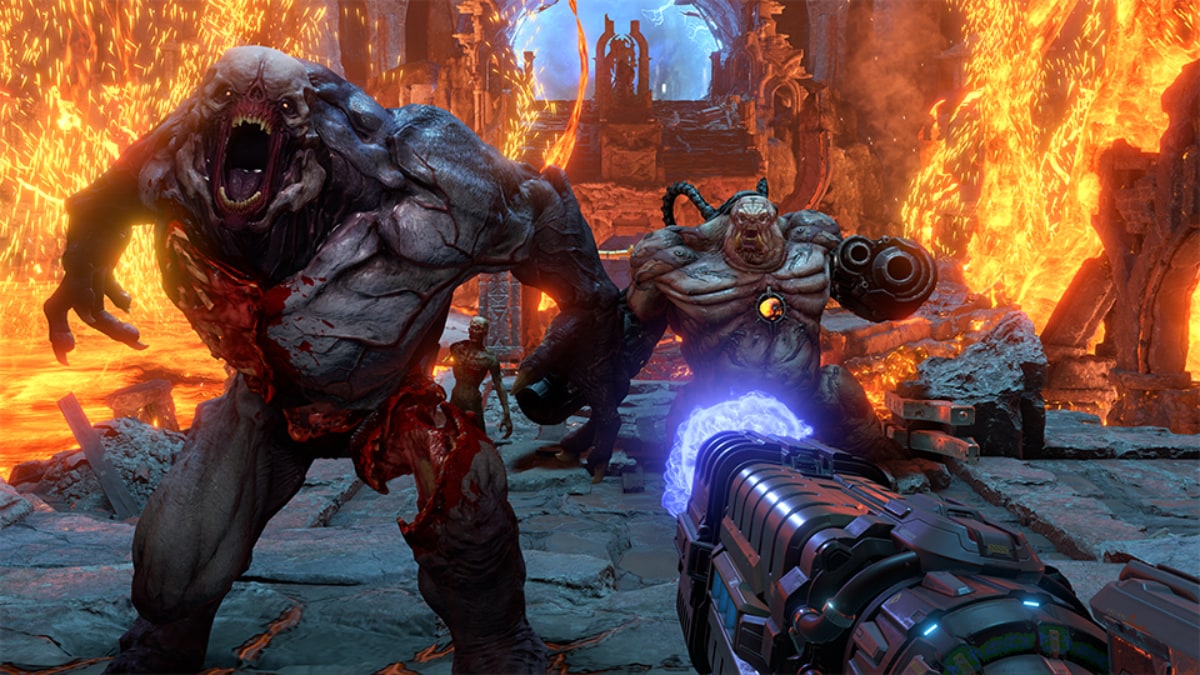 Bethesda Softworks joined the action by hosting its E3 2019 keynote on Sunday to announce tonnes of updates for gamers. The Rockville, Maryland-based game publisher didn't speak about anticipated Starfield or the Elder Scrolls VI, though it revealed a major new update for Fallout 76 and its debut into the emerging world of game streaming through a cloud technology called Orion. A new trailer and a November release date of Doom Eternal have also been unveiled formally. Similarly, the Nintendo Switch users are set to be cheered with The Elder Scrolls: Blades. Bethesda's E3 keynote also showcased Deathloop -- an all-new game developed by Arkane Studios, the team behind titles such as Dishonored and Prey.

Bethesda's E3 2019 keynote brought the debut of a new Doom Eternal trailer to show off the latest and greatest expedition of the Doom Slayer. It also revealed its release date. As a sequel to 2016's critically and commercially acclaimed first-person shooter game Doom, the new game is touted to bring a host of powerful new abilities, weapons, and fearsome demons. The adventures of the demonic invasion can clearly be presumed through the latest trailer.

Having said that, Bethesda announced that it is bringing a multiplayer experience through an all-new Battlemode that will let you move around the Doom world with your friends on the Web. Doom Eternal will be launched formally on November 22 for the Xbox One, PS4, PC, and Nintendo Switch, as well as Google's Stadia. Doom Eternal is now up for pre-orders via the Bethesda site, and all participating retailers. Those who pre-order will get the Rip and Tear Pack with a bonus skin, weapon, and level. Alongside this news, Bethesda also detailed the Doom Eternal Deluxe Edition.

Bethesda in collaboration with id Software announced Doom Eternal as its new title at the E3 conference last year. It also offered a first look at the new gameplay during QuakeCon soon after its formal announcement in August.

During the E3 conference on Sunday, Bethesda's stage was also leveraged to showcase Ghostwire: Tokyo -- an all-new action adventure experience developed by Tango Gameworks. Resident Evil creator Shinji Mikami and its creative director Ikumi Nakamura got on stage to announce Ghostwire: Tokyo. More than just another horror game -- and touted to be a new paranormal, the new game has a premise similar to the Leftovers. It requires the player to uncover the source of strange disappearances that has hit Tokyo's population and purge the city using mysterious spectral abilities and combat skills. The trailer also dims the light with the line that reads, "Don't fear the unknown. Attack it."

The release date of GhostWire: Tokyo hasn't been announced. You, therefore, need to wait for some time to experience the survival horror in the capital city of Japan.

If Ghostwire: Tokyo hasn't excited you, Bethesda's conference was also the place where Arkane showcased its all-new first-person shooting game Deathloop. The new offering is being built at Arkane's Lyon studio and is about two assassins, called Colt "The Captain" and Julianna "Jules."

The trailer featured during the keynote suggests that both assassins attempt to kill each other and their targets while moving around the lawless island of Blackreef. In the end, the trailer shows a line, "If at first you don't succeed… die, die again."

Bethesda also revealed the gameplay and an all-new trailer of Wolfenstein: Youngblood, the new World War II-themed game that is set to release on July 26. The latest trailer gives a fresh dose of alternate-history Paris that is full of co-op action. The premise moves around Blazkowicz's twin daughters, Jess and Soph who walk on the streets of 80s Nazi-occupied Paris to search for their father. There is also an AI companion that moves with the character if you choose to play the game solo.

In terms of rewards, there are unique abilities, weapon attachments, gadgets, and cosmetics among others that will unlock as you complete missions and move ahead. To recall, the July 26 release date was revealed back in March.

For all Fallout 76 fans, Bethesda announced that it is bringing its major update called "Wastelanders" that brings human NPCs and a brand new questline with real choice and consequence. The update is hitting Fallout 76 this Fall, though a limited preview of the new experience will debut later this week.

Alongside the addition of human NPCs, the update includes new weapons. Bethesda is also introducing the "Nuclear Winter" that brings a new 52-player battle royale mode to let players compete and battle to the death to become Overseer of Vault 51.

A free week is available until June 17 to experience the Nuclear Winter before its debut later this year. A trailer showcasing the new and upcoming additions through the Wastelanders update has also been provided for the time being.

To join the ongoing cloud streaming developments and make its games better compatible with platforms such as Google's Stadia and Microsoft's xCloud, Bethesda has announced Orion. The new offering comes as a collection of software technologies to optimise game engines and deliver an enhanced performance in a streaming environment. The platform is said to be game- and platform-agnostic, giving developers and game streaming networks the option to integrate it.

Being available as a game engine-based technology, Orion is claimed to achieve dramatic latency reductions of up to 20 percent per frame and requires up to 40 percent less bandwidth. It is also believed to be a "complementary" to the hardware technology in data centres built by other streaming providers. Bethesda demonstrated Orion at its E3 showcase by presenting Doom 2016 running at 60 FPS with high visual quality streamed to a mobile device. Furthermore, public trials of the new technology are expected to kick off soon, while developers will get a dedicated SDK to start integrating the offering into their games.

The game will receive full cross-play and cross-progression between both versions. Also, the existing free-to-play mobile version of the Elder Scrolls: Blades is also adding a new dragon questline, a custom jewellery system, and new jobs with solo arena battles through a free update.