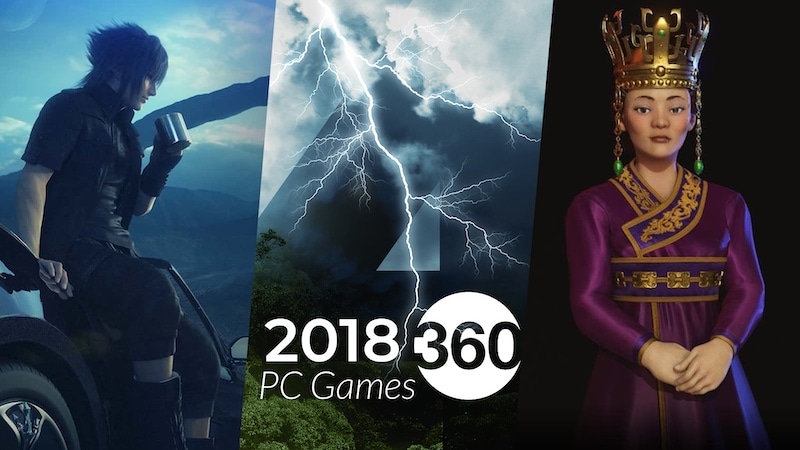 This has been one of the most eventful years for PC gaming. The price of some PC components were unreasonable (we're looking at you, Nvidia and AMD) for a large part of the year, which made us wonder whether it's better to switch to consoles entirely. On the software side, Steam has slowly been losing games — first from big studios and recently, some indie studios as well. The Epic Game Store made its entry into the PC gaming space late in the year and picked up some neat exclusives such as Hades from Supergiant Games and Super Meat Boy Forever from Team Meat, apart from Epic's own immensely popular battle royale game Fortnite. It's almost reached a point where every major gaming company has its own game storefront, which we have mixed feelings about.

All the talk about storefronts aside, 2018 was a very good year for PC games. We got a chance to play some remastered classics as well as top-of-the-line fresh titles and here are our top picks.

Few games we've enjoyed as much as Darksiders 3 (Review). It's a third-person game where the protagonist, Fury, uses a whip for combat. Dodging slows down time in this game and as you, you gain additional elements such as fire and lightning to add damage and open pathways to explore new areas. The combat is really satisfying and the story, featuring the seven deadly sins as the main antagonists is well-presented.

The best thing about Darksiders 3 is how organic the world feels. Gunfire Games has treated the entire world as a single dungeon so the way you explore its many locales and traverse from one area to the next feels natural.

We've always liked the Just Cause series of games for its over-the-top nature. Just Cause 4 (Review) has all the elements that made the first three games so much fun to play, and then some more. You'll reduce entire army bases to rubble in one mission and in another you'll find yourself literally flying into the eye of a storm. The story is ridiculous as ever, which is not a problem as hardly anyone plays Just Cause for the story.

We love the fact that some missions exist just so that you discover how to best use a cool new weapon you just acquired or make use of its grappling hook mods that let you pull objects together or send them flying into orbit. The visuals are great, and in our experience Just Cause 4 performs very well on PC.

Traditionally, Final Fantasy games have been rather lacklustre experiences on PC with anaemic visual options and poor performance. It's something that extends back to the original release of Final Fantasy VII on PC nearly 20 years ago. Final Fantasy XV (Review) released on Windows in 2018 and what an amazing port it is. This game is a gold mine for customisation nerds, as you can control every aspect of how the game plays via the settings menu in-game.

There's also an optional download for a high-resolution texture pack, which takes the total download size to around 130GB. From support for resolutions well beyond what is possible on the PS4 and Xbox One to integrating next-generation tech such as Nvidia's deep learning supersampling, Final Fantasy XV is great on PC provided you have a rig that can keep up.

Okay, we'll admit straight up — Age of Empires: Definitive Edition (Review) is not for everyone because it's a remaster of a game from 1997, with very few additions. We loved it because it's a faithfully recreated version (including every single cheat code) of one of our all-time favourite realtime strategy games and because it launched at a very reasonable price (Rs. 574) in India.

We're big fans of games with a historical setting and this one is among the best in that category. If you love gathering resources, building a beautiful town, and a massive army to crush your foes, look no further than this one.

Sid Meier's Civilization VI is a massive turn-based strategy game where a single match can last for weeks. This game can be a bit intimidating for new players but once you get over that minor hump, you'll find yourself sinking in countless hours in this fantastic game.

Rise and Fall is its first expansion that was released in 2018 and it adds a tonne of content including a new loyalty mechanic and civilisations. Unlike most DLC, the Rise and Fall expansion is almost as big as a full game on its own. Rise and Fall is a solid addition to a great game, and fully deserves its place on this list.

Which are your favourite PC games of 2018? Let us know via the comments.

Realme U1 to Go on Sale With Up to Rs. 1,500 Instant Discount via Amazon India
PUBG Mobile Vikendi Snow Map Can Now Finally Be Played on Android, iOS